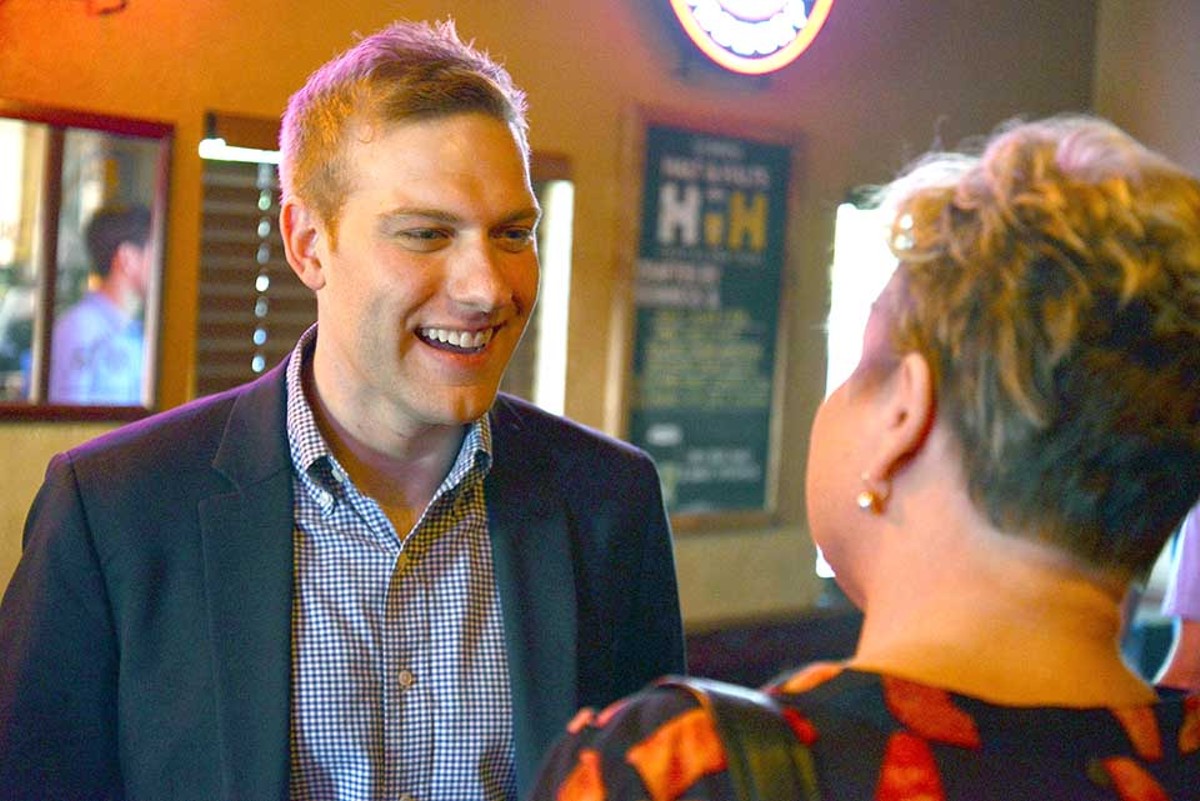 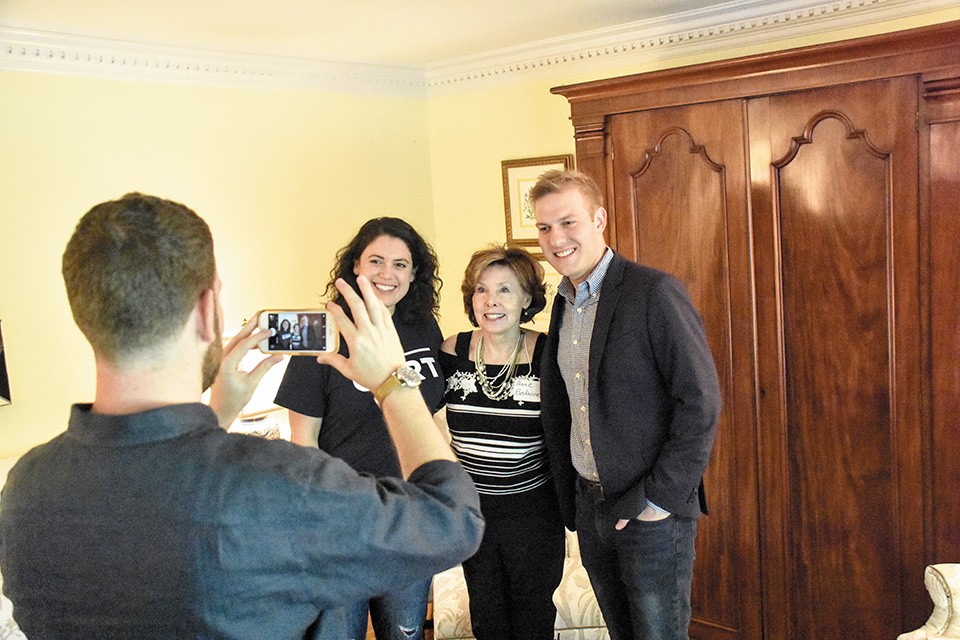 VanOstran seems happiest bouncing from event to event. He describes the endless calls to beg donors for money as "energy-taking." Canvassing, knocking on doors is "energy-giving," he says.

On this Sunday afternoon, he cheerfully rides shotgun in a Subaru Forester, while his campaign manager, Claire Botnick, preps him for the rest of the day. Botnick's husband, Aaron Davidowitz, is in town for the weekend from New York City and is acting as chauffeur. The three were classmates, and close friends, at Washington University Law School.

After graduation, Botnick and Davidowitz moved to New York, where he became an assistant district attorney in Manhattan and she landed a position as an associate at Cravath, Swaine and Moore, one of the nation's premier law firms.

Botnick had never managed a campaign before, but when VanOstran decided to run, she agreed to take a sabbatical and return home to St. Louis. The work suits her. Just as much of a grinder as VanOstran, the 32-year-old has proven to be sharp tactician. Political watchers describe her as brilliant and credit her as the campaign's secret weapon.

"I don't think it's a secret," says Mark Osmack, who would know — he finished second to VanOstran in the Democratic primary.

As the trio cruises toward the first of three afternoon events, Botnick goes over the schedule and tries in vain to get VanOstran to eat lunch or at least a snack. They arrive at 1 p.m. at the Kirkwood home of Democratic boosters John Bedwinek, a prominent oncologist, and his wife, Anne, a speech pathologist.

They're mindful of their 2 p.m. town hall in St. Peters. "Everyone hold each other accountable for leaving at 1:20," Botnick says as they get out of the car.

The Bedwineks have a gorgeous place, set at the end of a long, curved drive. Anne Bedwinek greets them warmly and ushers them into a front parlor for a photo. "What time do you want me to introduce you?" she asks.

"Whatever time works for you," VanOstran says. "I think we just have to leave about 25 after."

Like most fundraisers on this day, a constellation of candidates are on hand. The headliner is state Auditor Nicole Galloway, who has a key position this cycle as the lone Democrat holding statewide office. Normally, she would speak first, but knowing VanOstran is on a tight schedule, she graciously allows him the opening spot.

He gives a version of his spiel in front of the Bedwineks' fireplace, explaining to a crowd of nearly two dozen the reasons he decided to run and the difficulty he faces against an establishment incumbent. He comes off as genuine in person, but he's not above a politician's pun.

"We are in the Show-Me State," he says. "I wish someone could show me where Ann Wagner is because she doesn't show up for us."

He speaks for about five minutes before handing off to Galloway. And then they are back out to the Subaru, minus Davidowitz. Gregarious to a fault, he somehow struck up a conversation on his way out. Botnick looks down the drive with lighthearted exasperation.

"The man literally cannot make an exit," she says.

Moments later, Davidowitz comes sprinting up the drive, saying something about meeting a friend of a friend, which required a selfie. VanOstran laughs, and all three are grinning as they get back in the car at 1:26 p.m.

On the ride to St. Peters, they return to campaign mode. Botnick quizzes VanOstran on potential questions he might face at the town hall: health care, the environment, support for police, NFL players kneeling for the anthem. They are constantly honing their message, sharpening their arguments. VanOstran seems to enjoy this, too — the National Merit Scholar happily churning through his homework.

They cross the Missouri River into St. Charles County and make their way to an outpost of Llywelyn's Pub. About 40 minutes after leaving Kirkwood, they pull into the parking lot. As they walk toward the door, a young man brandishing a smartphone tries to buttonhole VanOstran.

"Cort, one question: Do you plan to repeal the tax cut?" he demands.

Publicly, Wagner has ignored VanOstran. Following the strategy of many an incumbent, she never mentions his name in ads or engages.

"I think she thinks she's got this, which is a gross misunderstanding," Osmack says. "Cort's got a lot of support, a lot of backing."

The apparent theory is that engaging would only amplify VanOstran's name recognition — and could only hurt her. Without much direct confrontation, the campaign remains relatively clean. Compared to the slugfest between U.S. Senator Claire McCaskill (D-Missouri) and her Republican rival, Attorney General Josh Hawley, the race for the House is decidedly civil.

However, the young man at the door signals that Republicans take VanOstran seriously. He's a tracker, tasked with appearing at campaign events and recording in hopes VanOstran says something regrettable.

"Hi, Freddy," VanOstran says with a quick smile before breezing past. He has described GOP tracker tactics as cynical, but later he will use the episode to needle Wagner.

"In the spirit of full transparency," he says, "it's pretty likely that we would send someone to her events, too — except she doesn't hold public events."

The only town halls Wagner has held during any of her three terms have been by phone or at private companies, designed for their employees, according to Politifact. In response, VanOstran has made public events a key part of his campaign, appearing in libraries, meeting halls and the occasional bar all across the district.

In Llywelyn's, a side room is already packed with about 50 people, more than a third of them in T-shirts for Moms Demand Action, an organization working for tougher gun laws. Campaign volunteers hustle to set up a sound system and pass out cards for people to write down questions.

VanOstran opens with his critique of Wagner as an absentee politician. "I promise I will continue to hold town halls regularly," he says. "I cannot promise there will always be beer."

Unsurprisingly, the first question from the audience is about preventing gun violence.

"Let's be clear, the gun-violence epidemic in this community does not have to be this way," VanOstran says, before diving into his upbringing around the gun culture of southwest Missouri. He adds that he respects the protections of the Second Amendment. "But I also know that 80 to 90 percent of Americans agree that there is a lot more that we can do to keep our kids safe from the plague of gun violence."

He offers support for universal background checks, closing the gun-show loophole, limiting magazine capacities and legislation to keep domestic abusers and people on terrorism watch lists from owning guns. During the next 40 minutes, he will answer questions on the Environmental Protection Agency, partisan politics, teacher salaries, Obamacare, repairing roads, the opioid epidemic and even the Electoral College. He is asked his top three issues, which he lists as health care, gun violence and campaign-finance reform.

Ken and Sara Snyder of St. Peters listen while minding their young daughter. "I wasn't surprised by anything I heard," Ken Snyder says, "but I was definitely impressed." He compares VanOstran to Beto O'Rourke, the progressive Texas congressman whose campaign to unseat U.S. Senator Ted Cruz (R-Texas) has made him an online star.

"I think there's something really important about connecting on an issue at a personal level," she says. 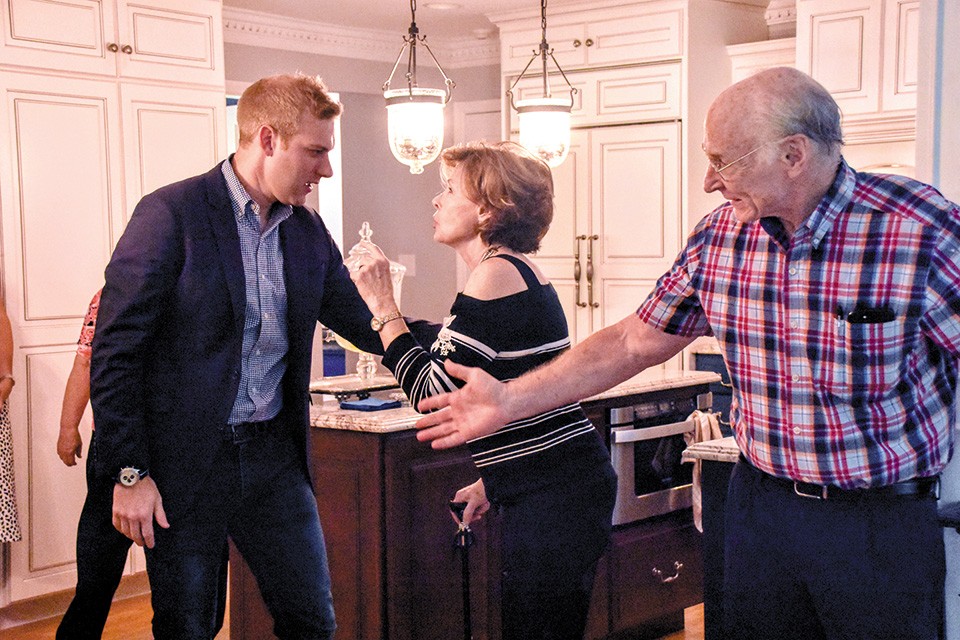 DOYLE MURPHY
VanOstran talks with Democratic boosters Anne and John Bedwinek during an event at their home in Kirkwood.

After a quick lunch with campaign staffers at Llywelyn's, VanOstran has a decision to make.

He had penciled in a 4 p.m. fundraiser for Jean Pretto, an Oakville Democrat running for an open seat in the Missouri House. It was a late addition, and VanOstran had planned to meet his sister for the 5 p.m. service at the Gathering United Methodist Church. Pretto's home is 40 minutes away in south St. Louis County. Dubinsky informs VanOstran they are already late, and if they go, there is no way church with Callie is happening.

VanOstran thinks it over for a few moments. It is not even clear whether they have promised Pretto they would attend.

"Maybe we should go, either way," he says. He calls Callie to let her know, and Dubinsky steers them south toward I-270. You don't make it to Harvard from small-town Missouri — much less to Congress — by quitting work early.

Pretto is happy to see them when they arrive. The daughter of a Teamster who worked for Anheuser-Busch, she taught music in south-county schools. About a dozen people are gathered. Her husband Joe, also a Teamster who retired from Vess Soda, mans a tent with Budweiser, liquor and a spread of food that includes his own spicy sausages, which he urges VanOstran to try.

While Pretto works the crowd, Joe introduces VanOstran to his brother, Richard. The two of them are Vietnam vets. They grouse about former Governor Eric Greitens.

"I hated that guy," Richard says.

VanOstran replies, "He clearly wasn't in it for the right reasons."

When he is called to speak, VanOstran gives a shortened version of his standard talking points. He is here more to support Pretto than campaign for himself.

"She's going to be a phenomenal rep in Jefferson City," he tells the group.

He and Dubinsky hang out for the other speeches. He has a few pieces of spicy sausage, which he says are pretty tasty. After about 30 minutes, he and Dubinsky say their goodbyes and walk back through the neighborhood to the hatchback.

"That was a great day for me," he says, enjoying his time away from the phone. "That was the lowest ratio of call time in a long time."

Dubinsky selects some Beatles and steers the Honda back onto the road. The song is "The Battle of John and Yoko": You know they didn't even give us a chance. Christ, you know it ain't easy. You know how hard it can be. At the end of a long day, it feels spot-on.