Irvin for Congress Facebook Page
Nate Irvin is asking Governor Jay Nixon to grant clemency to a man in prison for life for marijuana.

The Democratic candidate challenging Vicky Hartzler for her seat in the U.S. Congress is calling on Governor Jay Nixon to grant clemency to Jeff Mizanskey, the man serving a life sentence for non-violent marijuana offenses.

Nate Irvin, 25, kicked off his support with a press conference Monday on the capitol lawn, where Mizanskey's brother Mike gave an emotional plea. Mizanskey, whose story is detailed in a Riverfront Times cover story, has been in jail for 21 years and has no possibility of parole.

After learning about Mizanskey's plight from Aaron Malin, the director of research for Show-Me Cannabis, Irvin said he wanted to use his race for Congress to shed light on Mizanskey's sentence, which he calls "excessive to the point of absurdity."

Mizanskey is the only person in Missouri serving life without parole for non-violent marijuana offenses, thanks to a law mandating punishments for drug offenders. Earlier this year the Missouri Legislature nixed the legal provision that helped put Mizanskey away for life. 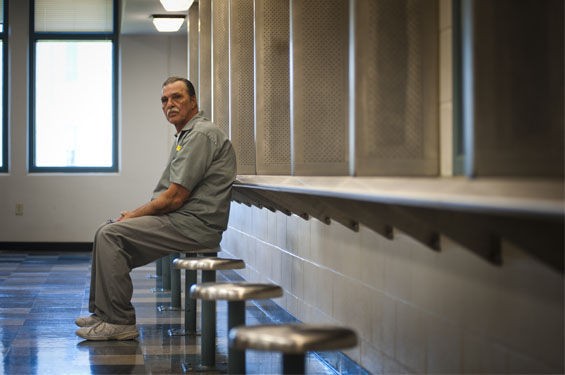 "The end goal here is to get people's attention and to get Governor Nixon to grant clemency," Irvin tells Daily RFT. "Hopefully, people will say as a society that justice isn't just exacting the vengeance of the law."

Irvin's particular focus is campaign-finance reform, but when he heard that Mizanskey has no chance of getting out of prison without action from the governor, he decided to act. Irvin says he'll do "everything in my power," such as hold more press conferences and bring the issue to Nixon himself, if he's elected to Congress.

Mizanskey's children, grand-children and great-grandchildren live in Sedalia, where Irvin is running for office. Irvin called out the incumbent representative to join him.

"Imprisoning non-violent marijuana offenders for life is truly big government at its worst, and I'm sure Representative Hartzler will join my call for Governor Nixon to immediately grant clemency," he says.

In July, Mizanskey asked supporters to write letters to Nixon pleading for clemency. Supporters have also raised $10,000 in an online fundraiser for ads and billboards urging the governor to free Mizanskey.