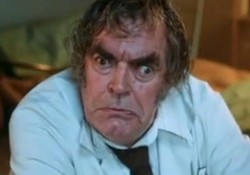 Dr. Nikolas Van Helsing believes he should be left alone to examine Farrah Fawcett in the back of Burt Reynold's ambulance without the intervention of the Missouri legislature, thank you very much.
Missouri state representative Vicki Schneider (R-O'Fallon) introduced a bill yesterday in Jefferson City that would make it a crime for doctors to work in the Show-Me State while intoxicated.

Schneider's HB 540 aims to make it a Class B misdemeanor to perform surgery or a medical procedure on a patient while under the influence of alcohol or drugs. Inebriated doctors who injure their patients could be charged with a felony and get seven years in prison.

Schneider provides no commentary in her legislation as to why Missouri needs such a law or whether the state is, in fact, awash in drunk docs. She could not be reached immediately for comment this morning.

That said, Daily RFT was able to find someone adamantly opposed to the bill. His name is Dr. Nikolas Van Helsing, who when interviewed this morning was winding down a 72-hour bender fueled by Huntleigh Highballs, Demerol and several boxes of Nicoderm CQ. Fans of car-chase movies may also remember Van Helsing for his role in the 1981 film Cannonball Run.

"This bill places an undue burden on traveling physicians, such as myself," says Van Helsing, a doctor of proctology and other related tendencies who says he's a graduate of University of Ragoon and assorted night classes at the Knoxville College of Faith Healing.

"As I'm racing across the country in a modified ambulance driven by Burt Reynolds and Dom DeLuise, I'm really supposed to pay attention to state borders?" he asks. "And if I inject myself with 20cc's of morphine in Paducah and I'm still high when the Missouri Highway Patrol pulls us over in Joplin I could spend seven years in the brig just because they find me in the back of the ambulance giving Farrah Fawcett a breast exam!? That's not right, and that is not what I understood to be the consequences when I entered the medical profession."

"Now, if you'll excuse me, time to snort some Ambien and go night-night."

P.S. Intoxicated doctors fill a valuable niche in society, concludes Van Helsing, as demonstrated in the video below.

Psst. Keep up on all the latest "news" by following Daily RFT on Facebook or Twitter @chadgarrison.