Canseco to McGwire: "Hook Yourself to a Polygraph and Call Me a Liar!" 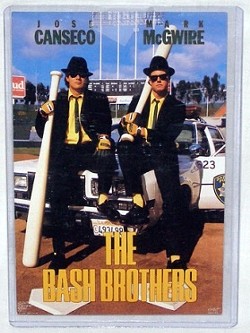 Remember Jose Canseco's allegation in his book "Juiced" that he and Mark McGwire shot each other with steroids in the locker room stalls in Oakland?

During his steroid confession Monday night to Bob Costas, McGwire denied the claim, saying that Canseco made up the story to help sell his book.

Yesterday Canseco fired back at his former "Bash Brother" during a radio interview on ESPN Chicago.

"I've got no problems with a few of the things he's saying, but again, it's ironic and strange that Mark McGwire denies that I injected him with steroids. He's calling me a liar again. I've defended Mark, I've said a lot of good things about him, but I can't believe he just called me a liar.