Hey, everybody out there in TV Land. Happy Halloween to the lot of you, and Happy Friday as well.

You know how Bernie Miklasz occasionally has that section in the paper that he calls "the nice section" ? Well, I don't usually have a nice section, seeing as how I'm a bitter, nasty, angry person, but I thought today that I'd like to actually pass along a positive little bit of news.

I received a note, not too very long ago, from a person close to Mr. David Kopp, who just happens to be a Cardinal farmhand, a right-handed pitcher. Mr. Kopp also just happens to be one of my very favorite prospects in the Cards' system, mostly due to an outstanding delivery that bears a striking resemblance to that of Mariano Rivera, one of my favorite big league pitchers.

David, a 2007 draftee out of Clemson University, was shut down in the middle of the season this year with shoulder discomfort, two words that we Cardinal fans have learned to dread. 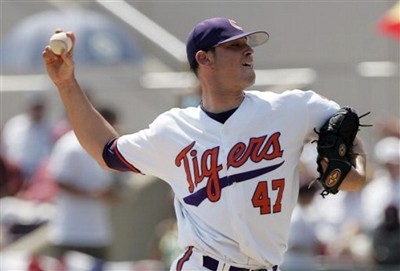 An MRI of the region revealed a bit of fraying in the labrum, but nothing really out of the ordinary for a power pitcher. It isn't ideal, of course, but hell, the simple action of throwing overhand is an extremely unnatural one for a human being, and if you were to look at the shoulders and elbows of every pitcher in baseball, you would probably find some degree of damage in 99 percent of them. Point being, what David was having was certainly concerning, but the amount of damage found to be present was nothing that anyone would be devastated to see in a pitcher's arm.

After being shut down, Kopp has gone on a fairly aggressive throwing regimen, designed to rebuild his stamina and, hopefully, reduce the level of irritation he feels in the area. He's moved all the way back to 180 feet on his long tossing and has begun actually pitching again off of flat ground. So far, he's throwing pain free and his stuff is returning to the levels it was at before he started having issues.

Also according to a person close to Kopp, the Cardinals have apparently done a great job handling Kopp ever since his problems started. There have been other young pitchers in other organizations with similar injury concerns who haven't been so lucky; guys who have simply been given instructions to "do some long toss" and then sent home with no more professional instruction or care being given.

As much flack as the Cardinals have taken at times (often from me personally), about their troubles with diagnosing and treating injuries, particularly those of the pitching shoulder variety, at the major league level, it's encouraging, and just flat out nice, to hear that they're apparently doing all they can to take care of the kids in their minor leagues.

Good luck on a continued successful rehab to Mr. Kopp; I personally can't wait until we get to see him in a St. Louis Cardinal uniform. He's an exciting power arm, and by all accounts a really great kid as well. Get well soon, David.

Just thought I would pass that along to help brighten everybody's day. Don't get used to it.