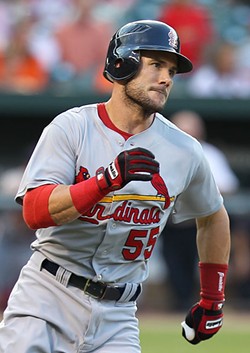 Image Via
I have a piece of advice for anyone out there who has an athletic child. If your child has the choice of playing football or baseball, you push him toward baseball. Given the choice between basketball and baseball, choose baseball. Soccer or baseball? Always baseball. Oh, you say he could skate before he could properly walk and already has a 105 mph slapshot at six years old? You need to put a stop to that shit right now and give the kid a bat.
Why should you push an athletic child toward baseball, regardless of whatever proclivities or skills or passions the kid may actually have? Because of Skip Schumaker, that's why.
Skip Schumaker has been one of the worst players in all of baseball the last two seasons. Over that span he has produced less than half a win in total value. And for those efforts, the St. Louis Cardinals rewarded him with a new two year contract yesterday.
Football players get killed. Just physically destroyed. Basketball players don't do badly, but the criteria includes eight foot tall and black, limiting the potential pool of players somewhat. Soccer players, well, they're soccer players. And no one wants to see that happen to a kid. Hockey players have to pay for ice at the Motel 6 on road trips.
But baseball players? Well, they get to be Skip Schumaker. Even when they're terrible. Especially when they're terrible.
The exact terms of Schumaker's new contract have not been announced just yet, but unless the words, "Up to and including, but not more than, three popsicles from the freezer on game day," are included in the language of the terms, I'm willing to bet it's a significant overpay.
I just don't understand what possible reason the Cardinals could have for bringing Skip back. His defense at second base is apocalyptically awful. His defense in center field is barely better. His defense in either outfield corner is average, which is to say good enough if he could hit. But, hey! Guess what else Skippy can't do? That's right, kids! He can't hit! He has no power, he isn't fast, he's never met a back-foot breaking ball he didn't want to swing at, and he hits slow rollers to the second baseman literally 106% of the time.
I suppose he'll be spun to the public as a utility player, thanks to his versatility. Ability to play multiple positions, and all that. And that's technically true, if by play multiple positions you mean, "Is able to walk out to various portions of the field and stand there as ordered by the coaching staff." Otherwise, if you're looking for something resembling quality play, then just keep on driving, nothing to see here.
Skip Schumaker adds nothing to the Cardinals. And yet here we are, staring down two more seasons of watching him hit grounder after grounder to the right side and dive into first base because it makes him look like he's really, really trying out there.
With Albert Pujols gone, the Cards' front office needs to be both smart and creative if they're going to find a way to keep the 2012 team from going the way of the 2007 team, the last defending champion we've had here in St. Louis. But instead of creative, we get one of the worst players in all of baseball coming back on a two-year deal. The Cards could really use Carlos Beltran's bat in the outfield, and they certainly have a little extra cash to spend; instead we get our fifth outfielder spot locked up good and early, so as not to miss out later when the rush on replacement-level players starts.
So parents of the world, please don't let your babies grow up to be footballers. Raise them up to play baseball. Because someday, somewhere, some foolish GM with a pile of money and no idea what the R in WAR stands for just might pay your little one to provide, well, nothing.