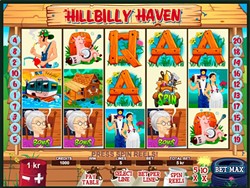 Not necessarily the model of slot machine seized, but one can dream.
[CORRECTION: The store in question is a convenience store attached to a Phillips 66, not a Circle K as originally reported. The post has been re-written to correct the error. Original post follows.]

Crane, MO, is a small town in the far southwest of the state, sporting a population of roughly 1,500 people. In a town that size it's tough to keep secrets -- and it's impossible to do so if you don't even make the bare minimum effort. The manager of Crane's Phillips 66 convenience store, identified only as A.P. until official charges are filed against him, did not make that token effort. He allegedly installed a pair of slot machines in the store, a move that was witnessed by at least one person, John Elmore.

John Elmore is Crane's chief of police. His office is across the street from the gas station.

Elmore inquired with A.P. about his intentions for those machines according to The Crime Scene, and A.P. told him not to worry about it because gamblers would "have to buy an internet card to use them and that no paper money would be accepted in the machines."

Elmore called the state gaming commission and the Combined Ozarks Multi-jurisdictional Enforcement Team; the latter sent undercover agents into the store to play the fruit machines. They won -- Phillips' got the loosest slots in town, don't you know -- and bought lottery tickets with the proceeds to prove they were given cash winnings. (No word yet on if their hot streak continued with the lottery tickets).

Police then raided the Phillips yesterday morning, confiscating two slot machines and some cash. They also took A.P. into custody.