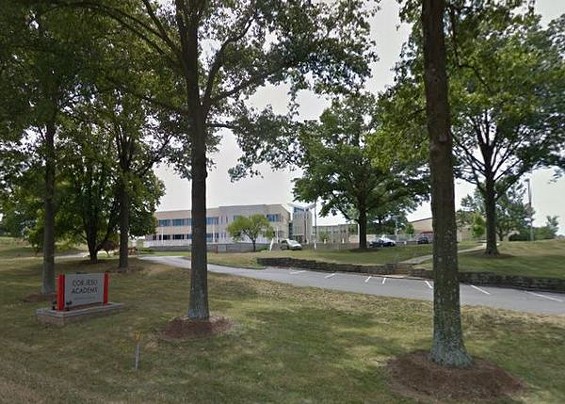 For Olivia Reichert and Christina Gambaro, this was supposed to be a summer to remember. But not like this.

Earlier this summer the couple traveled to New York to get married, and upon returning to St. Louis signed a mortgage on a house together. By the end of July they were anticipating the start of the school year at Cor Jesu Academy, an all-girls Catholic high school near Affton where the newlyweds were employed as teachers.

But after the school got ahold of the couple's mortgage application, Reichert, a P.E. teacher and coach, and Gambaro, a social studies teacher, announced on a private Facebook group that the administration had terminated them both, citing a violation of school's morality clause.

The news of the firings rippled among alumnae on social media and into the St. Louis LGBT community, but for weeks the commotion occurred largely in private. Cor Jesu alumnae tell Daily RFT that many former students contacted the school in outrage, but they chose to avoid publicly condemning the school in order protect the couple's privacy.

Reichert and Gambaro finally went public with their story on Monday, after a Vital Voice article published over the weekend broke the news of the firings. The article quoted Brian Sieve, a Catholic educator in St. Louis and Chicago, who harshly criticized alumnae for their silence.

"Where are their voices? Where are the hundreds, if not thousands, of lesbian alumnae?" Sieve told the Voice. "Do they really see justice in this, or any other LGBT witch hunt?"

The couple responded on Monday to defend the alumnae, outing themselves in the process.

"They have not gone public with this story out of respect, and we are beyond grateful for that," explained Gambaro. "Instead, they have written letters to the administration informing them that they have pulled their financial support. You might not think this is much, but it has made enough of an impact that the administration has had to address the dip in support. That, to us, is a victory."

Indeed, Cor Jesu alumnae hadn't been sitting on their laurels. Soon after the firings, one former student created the private Facebook group Chargers Allies, "an unofficial group of alumnae committed to sharing the love of Christ with those who identify as LGBTQ in the CJA community," according to the group's about section.

The Facebook page lists more than 300 members, including Jessica Buha. She graduated from Cor Jesu in 2004 and now lives in Chicago.

"The main reason I've become really invested in it is the thought of current students who feel like something is wrong with them, who feel like they are broken," says Buha. "The message that the administration is showing is if you are gay then you are not welcome in our community. That's what the stakes are, and it's shitty and awful."

Buha tells Daily RFT that she knew several gay classmates during her time at Cor Jesu, and that she never forgot watching them struggle with constant fear of being outed.

The Facebook group has also expanded into a website, chargersallies.com. Buha says the site, once fully developed, will serve the as public face of support for current LGBT students.

"It's important to show the St. Louis community that, yes, Cor Jesu alumnae aren't going to silently acquiesce to this status quo of firing teachers," she says.

It's not just recent graduates who are speaking out. St. Louis resident Pat Richards received her diploma in 1972, and she knew lesbian students living in secret back then as well. She says she worries for the school's current LGBT population.

"Cor Jesu has been such a strong, positive institution in this community for as long as they've been there, and it's always been a home to these girls. That's probably the thing that saddens my heart more than anything," Richards says. She has sent all five of her daughters to Cor Jesu.

"These young teenage people are dealing with their identities," she continues, "and we've pushed these young women who are struggling even farther back. For them to see something like this unfold in front of them, what kind of hope has been pulled away?"

In a statement, a Cor Jesu spokesperson declined to comment specifically on the firings, saying that the school "does not discuss personnel matters."

"We understand that, as a Catholic institution, Cor Jesu has an obligation to ensure that its employees serve as Christian role models," Reichert wrote in a statement to the St. Louis Post-Dispatch Wednesday. She goes on to accuse the school of targeting the couple for their sexual orientation and unfairly enforcing the morality clause in the their contracts.

Buha, Richards and other alumnae tell Daily RFT that they're drawing up plans for further LGBT support at Cor Jesu. Local LGBT activists are calling on allies, former students, faculty and the broader Cor Jesu community to protest the terminations by attending a peaceful gathering tomorrow morning at 7:45 a.m. at Gravois and South Laclede Station Road, near the Cor Jesu campus.