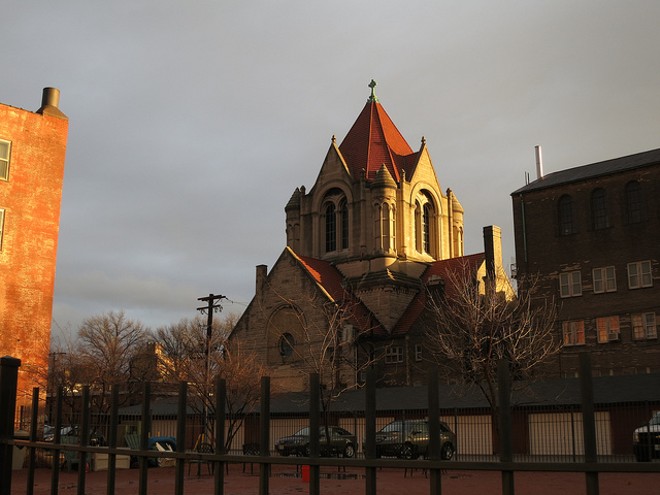 COURTESY OF FLICKR/PAUL SABLEMAN
Those visiting St. Louis churches, like this one on Olive, would no longer need to ask permission before bringing their firearms.

Newly filed legislation proposed by state Representative Rocky Miller (R-Lake Ozark) aims to remove one of the few remaining restrictions on people with a Concealed Carry Weapon permit in the state of Missouri — the requirement that they get permission from the pastor before packing heat in church.

Because, yeah, what churches just don't have enough of these days are guys with guns.

Last year, the Missouri state legislature weakened state gun laws just about as far as they could go, with the Republican supermajority overriding Governor Nixon's veto to approve new laws that make it easier for people to "stand your ground," to earn the right to conceal and carry their weapons, and to take those weapons just about anywhere.

But for some gun lovers, even that wasn't enough. After all, the law did carve out some exceptions — including churches.

The law held that people with guns had to get permission from "the minister or person or persons representing the religious organization that exercises control over the place of religious worship" before bringing them on the premises. While doing so wasn't a criminal offense, it gave the church the right to ask that person to leave — and, if the person refused, they could be cited by the police.

And now Miller wants to roll back even that weak restriction. In bare-bones legislation filed Friday — the first day lawmakers can pre-file their proposed legislation before the session that starts in January — the rural rep's House Bill 1382 would eliminate "the requirement that concealed carry permit holders get permission from the minister or persons representing such religious organization in order to carry concealed firearms in churches or places of worship."

Yeah. Because the main thing Missouri has been missing in recent months is that we haven't had one of these. We can just hear the conversation down in Lake Ozark: "People worshiping God in the Show Me State aren't sitting ducks for a gunman? Time to get crackin'!"

It will be interesting to see where those who purport to fight for religious freedom line up on this legislation. They were willing to fight for people of faith's right to turn down gay couples seeking baked goods — will they also fight for their right to restrict people with deadly firearms from their places of worship? When you ponder matters of life or death, one of those things seems a whole lot more pressing. But hey, maybe things look different in Missourah.