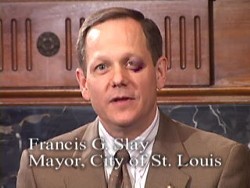 Updated with new and improved visual!

But how could that be? Especially given the fact that since 2003 Mayor Francis Slay has argued that the city is growing and that the Census is wrong in its annual estimates showing little -- if any -- population increase?

We contacted the mayor's office for comment late this morning. A few minutes later, we got an email back saying that Slay had just addressed the issue on his blog. Here's what he has to say:


This is absolutely bad news. We had thought, given many of the other positive trends, that fifty years of population losses had finally reversed direction. Instead, by the measure of Census to Census, they continue, though at a slower pace. Combined with the news from St. Louis County, I believe that this will require an urgent and thorough rethinking of how we do almost everything.

If this doesn't jump-start regional thinking, nothing will.

Yes, St. Louis County also saw a two percent decline in population over the past ten years. Still, how does the mayor account for the city having its lowest population in 130 years when all this time he's been assuring us that it's growing?