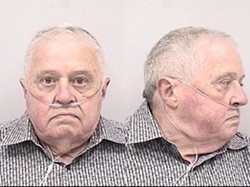 Via Westword
Prosecutors allege Father Manning may have provided victims with marijuana.

A priest who served in four different Missouri parishes has just been formally charged with sexual abuse of a minor in a Colorado courtroom.

The details of Charles Robert Manning's alleged crimes are under seal, but an investigation began after one 15-year-old boy complained that Manning was behaving like a "jealous lover" toward him.

While Manning awaits his next court date, new details of his alleged crimes are beginning to trickle out, and victims' advocates want to know why Manning has been allowed to come back to St. Louis.

According to Bishop Accountability, Manning served in Glencoe, Bridgeton, St. Louis, and Imperial, starting in the late '90s. For reasons that remain unclear, he was reassigned to St. Gabriel the Archangel Catholic Church in Colorado Springs in 2007.

Early this year, Manning told his congregation he had to step down pending a criminal investigation. The one-time "chaplain of the year" formally retired, then turned himself into authorities in late May. The charges were never revealed, but an anonymous parent told The Colorado Springs Gazette that a 15-year-old friend of the family confided he needed to escape from Manning's obsessive texts and calls, demanding to know where he was.

Manning was formally charged yesterday in a Colorado Springs courtroom. According to The Gazette, the prosecutor mentioned that Manning may have provided alcohol and marijuana to his alleged victims. The judge ordered a weekly urinalysis test for the ex-priest.

Until his next court date on July 19, Manning's attorney said that the 77 year old is back in St. Louis, living in a home for retired priests. According to David Clohessy, director of Survivors Network of those Abused by Priests, that means he's likely at the Regina Cleri Home in Shrewsbury. A 2005 Post-Dispatch article about the facility found that while several priests accused of abuse have lived there, residents are not closely monitored, and live in close proximity to young families and day care centers.

"Why are we still importing predator priests?" says Clohessy. "Why aren't we puting them in truly secure facilities?"