Check out the Grand Re-Opening of the St. Louis LGBT Center 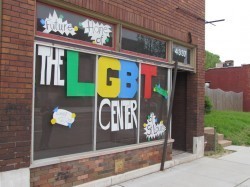 A work in progress--it's ready now!
It's bigger. It's better. And you're invited.

The LGBT Center of St. Louis has moved to new digs on Manchester Avenue in the Grove, and this Sunday is an open house. From 2 to 6 p.m., stop on by the new home of the community resource for the lesbian, gay, bisexual and transgender community -- straight allies heartily welcomed.

"We needed to make the center a little more accessible to our community and give them a little more visibility," says the center's board president Leon Braxton. (You may know Braxton for his beyond-fabulous alter ego, the magnificent Dieta Pepsi.) "A lot of people didn't even know we had a center."

The center's new home is really well-placed. It's at 4337 Manchester Avenue, which is in the same general area as a cluster of some of the city's finest LGBT bars and clubs, but far enough away from them that it's peaceful and not in the party zone. It's near restaurants and a family counseling center.

The move was fairly fast, Braxton says -- it took about two months. Their old lease was up, the new building was available, and the board took a leap of faith.

Braxton envisions the space as a gathering place, a space for performances like spoken-word or acoustic music, and a referral resource, as well as hosting community events and programs.

"It's going to be a safe zone, like if a student didn't want to go right home after school," Braxton says. "It'll be like a big community center."

Volunteer staffers will be in the center Tuesday through Sunday from 10 a.m. to 9 p.m. The hope is that more volunteers will step forward and the center can be open seven days a week.

There's a resource library with books, magazines and even albums on vinyl. People can call for referrals on everything from coming out to being new to the city and looking to socialize.

Braxton's particularly proud of an upcoming smoking cessation project run out of the center in partnership with the city health department and the University of Missouri. Tobacco companies, he says, target the LGBT population, which has higher smoking rates than the general population.

The center will also be partnering with the St. Louis LGBT History Project, which we profiled back in June. The center will help in the effort to collect and catalog artifacts from the LGBT history of the city.

"Just come by and check it out and let everybody know, not only is it for the LGBT community, it's for allies too!" says Braxton. "Straight people are welcome too."