Cherokee Street Pushes Back Against Yet Another South St. Louis Dollar Store 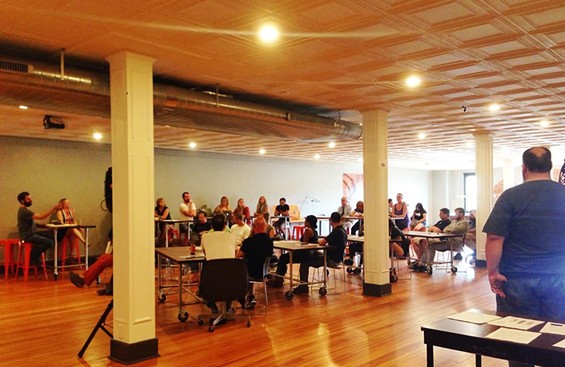 The Cherokee Street Business Association held an emergency meeting Tuesday night when members heard through the grapevine that Dollar General had its eye on the Jefferson Avenue storefront just north of Cherokee. The group overwhelmingly voted to oppose the development -- the largest in the business district in decades -- or to at least put it on hold until neighbors have their say.

"These are small business owners, we don't have a lot of large retail that is formula based, like a Dollar General," says Cara Spencer, a member of the business district and a staff member at Nebula Coworking. "People do not particularly want this in their neighborhood. They want to know the details of it."

Residents were frustrated that Ninth Ward alderman Ken Ortman has known for a month that Dollar General was eyeing the south-city spot, which borders on four St. Louis neighborhoods: Benton Park, Benton Park West, Gravois Park and Marine Villa. The business district only found out when a Marine Villa resident told organizers and the Benton Park Neighborhood Association passed along a copy of the plans.

via
The plans for Dollar General.

"As the largest development project within the CSBA in decades, we feel the association should have been informed within a reasonable time of receiving the plans and been given an opportunity to provide feedback on the proposal," the group announced via Cherokee Street News.

Ortman tells KTVI (Channel 2) he was waiting until he had more information to inform neighborhood organizations and the business district.

Even if a different, more local business had wanted to buy the building, they couldn't have. When Hoods moved out of 3300 S. Jefferson Avenue, Cherokee Street developer and the owner of Nebula, Jason Deem, researched how much it would take to buy the large building, but he couldn't find any information, Spencer tells Daily RFT.

"It never actually hit the open market," Spencer says. "It may very well be that [Dollar General] ends up being the best use because of the price of the property, I don't know. But it didn't hit the open market. It didn't have a chance to have a local developer come in and see if there was interest."

Spencer says developers are applying "a false sense of urgency" on officials and neighbors to support the dollar store.

"To be supportive of the first project that comes through is a little short-sighted," Spencer says. "Once they get in there, it's a really big commitment to support such a big development that is known for hurting small businesses and not giving back to your community."

Besides, does the neighborhood really need yet another dollar store?

Update: Here's the letter of opposition from the Cherokee Street Business Association: