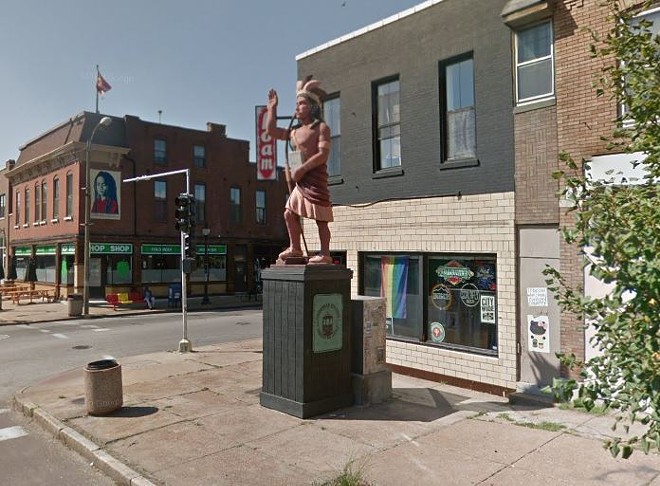 The removal followed a September 16 vote by the Cherokee Street Community Improvement District. In a statement, the district confirmed the statue's removal as of Friday morning.

"The statue was commissioned in 1985 by the Cherokee Station Business Association to serve as a landmark for the street and its commercial district," the district said in the statement. "However, the statue does not appropriately honor the indigenous communities that have called this land home."

The district added that the planned relocation has the support of artist Bill Christman, who had been commissioned to create the 200-pound, 13-foot tall fiberglass statue.

Though Christman worked to touch up the statue with a new coat of paint in 2009, the artist himself has criticized his own work. In 2007, he told the St. Louis Post-Dispatch that he believed the statue itself is not insensitive — the story claims he "worked closely with a Cherokee Indian group to ensure it didn't conjure up cliched images of Indians" — but that he regretted the proportions of the final piece.

"It's more anatomically incorrect than it was political," Christman said at the time, later adding, "To my everlasting mortification, I was the sculptor of that."

It's not clear which Cherokee groups Christman consulted during the making of the statue, though the figure's feathered headdress does not appear to be consistent with traditional Cherokee garments and fashion, which broadly included a shaven head, ear piercings, facial tattoos and distinctive hats. The elaborate feathered headdresses, or war bonnets, are traditional garb associated with the American Plains Indians and are often portrayed in stereotypes of Native American regalia. The headgear was not part of the traditional clothing for Cherokee.

The statue's creation was not a product of any historic connection to the Cherokee tribes, but was overtly a marketing ploy by local merchants in the early 1980s. As the Post-Dispatch reported in 2007:

Recognition lies at the root of the statue. In the early 1980s, merchants on the street were looking for one big thing to distinguish the area.

"We had spoken about possibly doing like a trolley-car thing," said Rick Ruzicka, manager of the Globe Discount Variety, 2700 Cherokee St., who was a member of the Cherokee Business Association at the time the decision was made. When a vote was taken, the Indian was chosen.

"It was kind of like having some type of landmark," Ruzicka said.

"It was the merchants' association that wanted to increase visibility," said Christman, who has a studio in his University City home.

The statue's removal was first reported Friday morning by the St. Louis Observer, which posted a photo of the now-statueless intersection at Cherokee and Jefferson.

The “Cherokee Native” statue has been removed from its corner at Cherokee & Jefferson after a community vote on the issue last night. pic.twitter.com/3ylV5fHLwQ