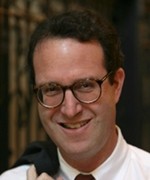 To a Chicagoan, the state of Illinois south of Joliet is nothing but a lot of cornfields, except maybe for Champaign-Urbana, and St. Louis is just a teeny, tiny blip on the distant horizon. But when an intrepid Chicagoan dares to cross those nearly 300 miles of incredibly flat and boring terrain, he feels as though he has made a tremendous discovery, on the same exalted level, perhaps, as Lewis and Clark!

Such was the case last year when a Chicago Sun-Times reporter went on a press junket paid a visit to the Delmar Loop. Now the latest Chicagoan to discover the wonders of our fair city is Blair Kamin, the Chicago Tribune's Pulitzer Prize-winning architecture critic.

Kamin spent last weekend here "on assignment". (Heaven forbid a Chicago journalist would visit St. Louis on his own volition). He took in a couple of games at Busch Stadium, which he described as "a retro ballpark that is too competent and context-driven to hate, but too bloated to love." In between, he visited Citygarden, the Arch grounds and the Wainwright Building, which he plans to discuss this week in his blog, Cityscapes.

He writes as an introduction:

It's a good time to look at St. Louis. The international design competition for the grounds around the Arch--one of the teams includes the Chicago office of Skidmore, Owings & Merill--will soon rev up.

It's unclear whether he explored St. Louis beyond downtown or whether he consulted with any local gurus like Steve Patterson, Michael Allen or Esley Hamilton. One sincerely hopes so. After all, it is a long and perilous journey across central Illinois. Who knows when Kamin will pass this way again? Still, we're looking forward to seeing what he has to say.