Chick-fil-A, Raising Cane's May Come to U City Costco Footprint 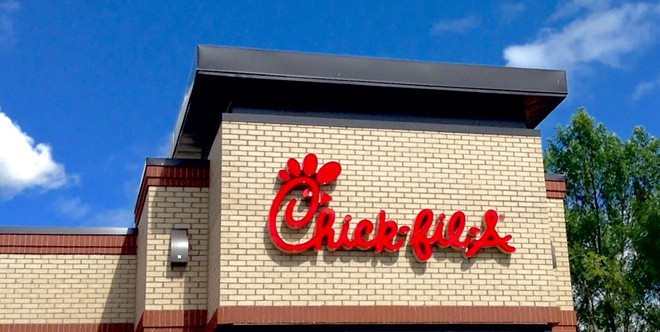 Mike Mozart / Flickr
What the cluck?
Jeffrey Plaza and its surrounding area was once a bastion of diverse locally-owned businesses in University City — that is until a $190 million development at the intersection of Olive and I-170 forced business owners, many of them immigrants, to move or permanently shutter their operations.

Now, University City may soon replace this once beloved and thriving melting pot with none other than fast-food behemoths Chick-fil-A and Raising Cane’s.

According to the St. Louis Business Journal, the two fast-casual chains are the latest tenants vying to occupy the Market at Olive development anchored by Costco in University City.

Once zoning is finalized and construction finished, Raising Cane’s will open just south of Olive near McKnight Road and Chick-fil-A will serve its bland “hate chicken” in two lots that were once a part of Jeffrey Plaza.

Past tenants of Jeffrey Plaza, an unassuming yet cherished strip mall off Olive, included vibrant international businesses such as Pho Long and East Seoul Oriental Groceries.

The footprint surrounding Costco’s development was once the only place in the St. Louis-area where one could find nigiri sushi, Jamaican jerk chicken and a Korean grocery store all within the same radius.

But sure. Let’s erase the flavor and character of University City with not only one, but two corporate chicken restaurants — as if the Costco that displaced locally-owned businesses and homeowners wasn’t already bad enough.

And the loss to local business owners is surely immeasurable.

Easton Romer’s Jamaican restaurant, De Palm Tree, was the last restaurant left in Jeffrey Plaza before it shuttered in March. And across Olive, Bob’s Seafood, a long-time local seafood institution, closed in June after fighting “tooth and nail” to stay open, general manager Josiah Badenoch told Sauce Magazine at the time. “But the government gets what they want.”

Perhaps this shouldn’t come as a surprise. Paving over minority-dominated neighborhoods (Meacham Park, Hop Alley, Mill Creek, to name a few) in the name of progress is more quintessential St. Louis than cracker-crust pizza — and more American than fried chicken.