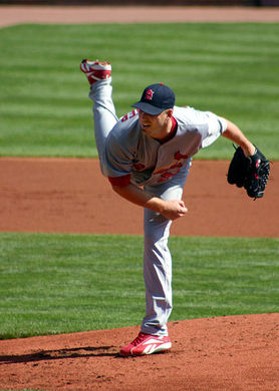 It's been a long time coming, but it looks as if we're finally going to see Chris Carpenter take the mound for the Cardinals in 2012. In about...well, a little less than four hours, in fact. The Cardinals take on the Chicago Cubs this afternoon in Wrigley Field, and the man they call Carp is scheduled to start for the Redbirds.
The man has been beaten, battered, and bruised. He now has one rib fewer than he started his life with. Many people quite reasonably wondered if his career was, in fact, over. But Chris Carpenter has been here before. He's heard the questions and lived through the doubts. This is not a man unaccustomed to coming back against long odds.
Personally, I thought Chris Carpenter would pitch again. I didn't think he was going to be forced to ride off into the sunset by this latest injury, at least not until he was damned good and ready. But I did not think there was any way in heaven or on earth we would see Carp back on the mound, in a game, this season.
That's not to say this isn't a somewhat worrisome day for the Cardinals. It absolutely is. This team has gotten along just fine without Carpenter all season (well, okay, maybe I shouldn't say they've gotten along just fine; it has been a tough slog at times, after all), as other pitchers have stepped into the starting rotation and thrown plenty of quality innings. The Cards haven't really felt the loss of Carpenter the way I think many of us were afraid they would early in the season. A big part of that, of course, has been the presence of Lance Lynn, who has taken the lion's share of what would have been Carpenter's starts this year.
All the same, there's no question -- at least not in my mind -- that having a healthy, productive Chris Carpenter back in the rotation would make a real difference for this team. Carpenter isn't just a quality pitcher; even at an age when many pitchers are starting to look toward the finish line, career-wise, Chris Carpenter is the sort of pitcher who can simply take over a game, changing the complexion entirely. For proof, we really need look no further than last postseason; specifically, the Game 5 NLDS duel, when Carp stared down Roy Halladay and carried the Cardinals into the NLCS on his surgically-repaired (several times over), shoulders. I'm not saying Lance Lynn or Joe Kelly or some other pitcher who has helped to fill in this season can't do something similar; it remains to be seen if they can or not. But Chris Carpenter...well, he's shown us all what he can do on the mound, time and time again. If Carp is healthy, he can still be a difference maker.
The worrisome part about today's start for the club has to be trying to gauge just how healthy Carpenter really is. He's been throwing for quite a while now, and all the reports have been positive. But until he's on the mound in a game situation, we don't really know how his stuff is going to play. And we won't know for another few days how exactly his arm is going to rebound. And, honestly, it's going to be impossible to really tell how reliable Carpenter is going to be until, well, we don't actually have enough time left to determine that.
And that's why this could be a scary day for the Cardinals. This team is in too critical a juncture in the season to have any more uncertainty thrown into the mix. If Carpenter is lights out, that's probably a good thing. If he's awful and looks physically unsound, that's definitely a bad thing. But anything in between, well...it's just more tough decisions and uncertainty for a team that really can't take much more of either. Even if he's really good, the question of how much the Cardinals are willing to rely on him the rest of the way is sure to be a thorny one.
So yes, this is an exciting day. A day I'm sure not many people expected to see this year. A day that once again reaffirms just how remarkable an individual Chris Carpenter really is. But for the club, today is a little more complicated. Still exciting and promising and all those other things, yes. But it's also possible that, by the time the Cardinals and Cubs are finished this afternoon, there may actually be more questions for the Cards to consider, rather than fewer. And that really is a slightly scary proposition.