Christopher Coleman Case Is This Week's 48 Hours Mystery, But How? 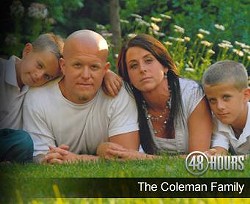 CBS News
This Saturday marks the three-year anniversary of the brutal murders of Sheri Coleman and her son's Garret, 11, and Gavin, 9, found strangled to death in their Columbia, Illinois, home.

And to mark the event, 48 Hours Mystery, will air a program Saturday night (9 p.m., KMOV Channel 4) re-examining the investigation into the murders.

But as the name of the show suggests, was there ever any mystery at all about the killer?

From the very outset, investigators suspected Christopher Coleman (Sheri's husband, and father two her children) murdered his family as they slept. First there was his cockamamie story about getting up early to go to the gym and then calling his family out of fear that a stalker may have come to their home.

Then there was the "stalker" whose email threats, investigators soon discovered, originated from Coleman's own laptop. That followed the revelation that Coleman kept a mistress in Florida, and told her that he would soon leave his wife family for her. Only, if he were to divorce Sheri, he knew he'd lose his well-paid job as a security guard with Joyce Meyer Ministries -- thus providing a motive.

Yep, as it turns out, the Coleman case was a bit of a slam-dunk. (A jury spent relatively little time last year -- on the second anniversary of the slayings -- convicting him of three counts of murder.)

That said, we're quite sure 48 Hours Mystery can -- and will -- provide an hour of spellbinding content on Saturday. But a mystery?  This we'll have to see.