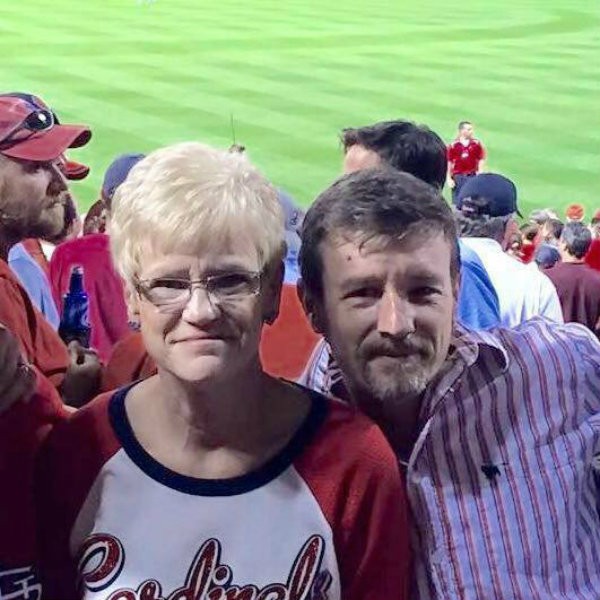 Image via Facebook
Christopher Sanna celebrated the 60th birthday of mother Candis Sanna on Friday shortly before he was mugged and shot.
The Army veteran shot in the back after a Cardinals baseball game moved out of intensive care today, his mother said.

“We're trying to be optimistic and pray for a miracle, but at the same time we have to be realistic,” she said.

Sanna, 43, of House Springs and his girlfriend were walking to his car about 10:30 p.m. when a man bolted from a vehicle and ordered them to give up their valuables, police said. Sanna's girlfriend turned over her purse, and the couple ran when the man pulled a handgun, according to authorities. The shooter blasted Sanna in the back, knocking him to the pavement just blocks from the stadium crowds.

Image via GoFundMe
Christopher Sanna is likely paralyzed after he was shot in the back during a robbery on Friday in Downtown.
As the former soldier lay helpless on the ground, the gunman rummaged through Sanna's pockets.

“Bitch, give me all your stuff,” he reportedly said.

Only the arrival of a passing car scared the shooter away, Candis Sanna said.

The suspect is still on the loose. City police Chief Sam Dotson enlisted the help of an FBI task force on Monday, and Mayor Francis Slay has promised to approve unlimited overtime for detectives working the case. The robber is a stocky black man between 5 feet 2 and 5 feet 4 inches tall with long dreadlocks, police said.

It was hard not to feel “hateful and angry” toward the man, Candis Sanna said, but she is mostly disappointed anyone would do this to another human being.

“What makes him this way?” she asked.

Sanna and his girlfriend had gone to the game to celebrate his mother's 60th birthday. The rest of the family was still in the exiting crowds when he began dialing for help. Candis Sanna checked her phone and found five missed calls.

“I knew something happened,” she said. “Something terrible.”

Image via GoFundMe
Candis Sanna with son Christopher Sanna, who was shot on Friday after attending a Cardinals game.
She listened to her voicemail, and it was worse than she thought.

Doctors later found the bullet had punctured Sanna's lung and liver and shattered two vertebrae in his lower back. They've elected not to operate in hopes some of the swelling near his spine will subside and give him some feeling, Candis Sanna said.

He was able eat a little on Monday, and hospital staffer were able to move him out of ICU today as he continues to improve, his mother said. Sanna and his family are already looking ahead as doctors prepare him for a brace to stabilize his fragile back. The manager of a Midas store, he's worried about whether he'll be able to return to work, his mom said. His house will have to be renovated to accommodate a wheelchair. And he's scared he'll never ride his jet ski or pilot his boat — two of his passions — ever again.

Candis Sanna worries about the long-term emotional trauma of the horrific crime, replaying the moment the gunman stood over his body on the street.

“He thought he was dead,” she said. “He thought the bullet was going to come to his head.”

The silver lining has been the support from people, especially service men and women, from California to New Jersey, she said. Donations through a GoFundMe online fundraiser had topped $60,000 by Tuesday morning, and emails and calls of support continue to pour in.

“It kind of restores your faith in humanity,” Candis Sanna said.