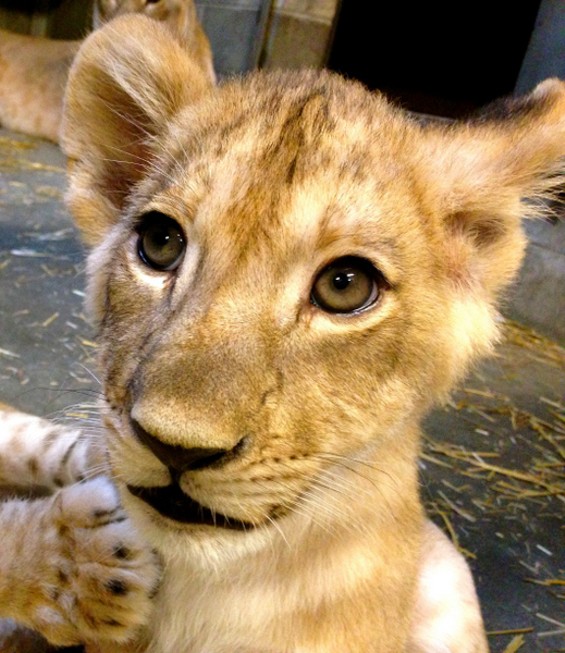 The compassionate spirit of a St. Louis zookeeper who died of breast cancer lives on in the cub of the lion she helped raise.

Lion keepers at the Cincinnati Zoo named three-month-old cub Huruma, or "Uma" for short, after the Swahili word for "compassion" in honor of Becky Wanner, who worked as a lion keeper in St. Louis before her death two years ago.

Wanner helped hand-raise Uma's mother Imani, the first lion born at the Saint Louis Zoo in 37 years. When Imani's mother wasn't able to produce enough milk to sustain her, Wanner and a team of zookeepers fed her by hand.

"Becky and Imani shared a bond that few others on the planet will ever know or understand, a bond born out of love, dedication and above all other things, compassion," Cincinnati lion keeper Wendy Rice says in a blog post. "It's the kind of connection that you hold onto for strength during life's harder moments."

Those harder moments began soon after Imani's mother gave birth to a second litter. Wanner went to the doctor after feeling numbness in her hands, Rice says, and soon discovered her breast cancer had returned after five years in remission.

"As Becky underwent chemotherapy, she would often return to the St. Louis Zoo," Rice says. "Her husband Mark would bring her to the lion building after her appointments so that she could be with Imani. The visits with Imani seemed to lift Becky's spirits during those difficult times, and the unique and special bond they shared was apparent to everyone."

Wanner had pictures of Imani with her when she died in February 2013.

Rice wrote about the decision to name Uma after Wanner on the Lion Keeper's Blog after the zoo released the names of Imani's three newborn cubs. Uma's sister Kya, whose name means "diamond in the sky," was named via an online vote, and Willa was named after William J. Williams, the former CEO of the company that funded the lion exhibit and former part-owner of the Cincinnati Reds.

Rice says it was easy to pick which cub should be named after Wanner.

"Cub No. 1 was bold and adventurous and would often sneak away from her littermates to have private nursing and bonding time alone with Imani," Rice writes. "Of the three girls, No. 1's personality seems to be the most like Imani's, so Cub No. 1 became the standout choice to honor Becky's memory."

Rice says she's honored to continue to care for Imani and her cubs in honor of Wanner.

"Although I'd never met Becky, I can't help but feel a connection to her through Imani," Rice says. "Everyone who knew Becky remembers her for her beautiful smile, her love of and dedication to the natural world, and above all things, her compassionate spirit."