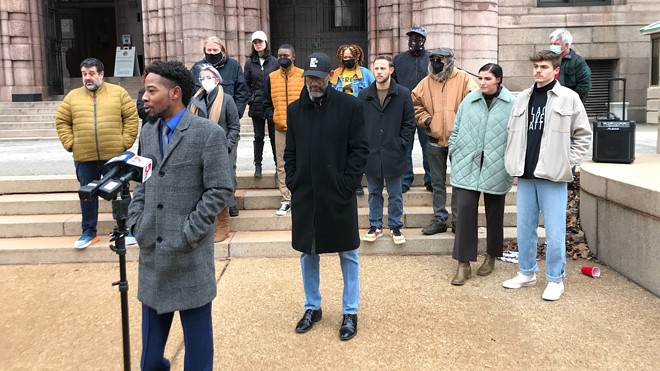 Ryan Krull
State Representative Rasheen Aldridge protests the actions of St. Louis City Counselor Sheena Hamilton
UPDATES: A statement from the mayor's office is below, and Cori Bush has reiterated her stance against qualified immunity.

The controversy involves the dozens of federal lawsuits against St. Louis police and the city in the aftermath of the 2017 Jason Stockley protests. Protestors say they were beaten, body slammed and pepper-sprayed by police.

Today’s speakers expressed concern over Hamilton’s approach to qualified immunity for police officers, which grants officers and other government officials a higher level of protection from civil lawsuits than that afforded citizens.

Gray and others suspect Hamilton is trying to expand qualified immunity to the police, action they say would have national implications.

"We know that the bar is already set so high that it is almost impossible to prosecute rogue police officers," Gray said. "We understand the implications of what the city counselor is doing, not just in St. Louis."

"[I’m used to fighting] a lot of bad policies in Jefferson City, policies that disproportionately affect areas like mine in St. Louis," he said, adding that he "didn't expect" to be doing the same thing here.

Hamilton is "trying to take us back in a direction we don't want to go in," he added.

After years of delay, in January, a panel of three federal judges ruled that the case brought by plaintiff Brian Baude, an Air Force veteran, could go forward. Baude's lawyer Javad Khazaeli said the ruling "is pertinent to all the cases" stemming from the Stockley protests.

Next, in what Khazaeli called an "extremely aggressive" move, Hamilton's office asked the case be heard again before the entire circuit court, not just a three judge panel.

In their request for that new hearing, Hamilton's office said the case raises "questions of critical national importance…by analyzing defendants' claims of qualified immunity at a high level of generality."

"I was at those same protests as Reverend Gray, I got tear gassed," Ninth Ward Alderman Dan Guenther told the RFT after the press conference, calling Hamilton's latest move "a step backwards," and suggesting Hamilton is "taking advice from some of the city counselors who have been around in the past."

"The courts have said on a number of occasions what happened [at the Stockley protests] was wrong, so I'm confused as to why the city counselor's position would be that this is something that needs to be appealed and that [qualified immunity] needs to be on stronger footing," said Guenther.

"In one of their points they say we should not be able to hold police officers accountable for beating people who are compliant because they are just doing what their bosses told them to do," Khazaeli said. "Then in the next paragraph they say we shouldn't be able to hold the officer's bosses accountable because they weren't the ones beating citizens."

Khazaeli added that lawyers with the city counselor's office have said that if they lose this appeal "they are willing to take this all the way to the Supreme Court."

"We welcome St. Louisans voicing their concerns, and the City of St. Louis is not and will not make any argument to expand qualified immunity – only to apply existing federal law as it applies to holding individual public servants accountable," said Nick Dunne, spokesman for Mayor Jones, in an email. "Since the City implemented the Ahmad consent decree in 2017, neither the City nor SLMPD have been sued regarding protest cases, and we will continue to ensure the decree is followed."