City Museum Fights Back Against "Frivolous Lawsuits" -- Via Facebook 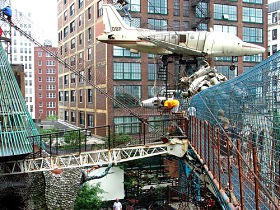 Image source
The City Museum: a lawsuit waiting to happen? Or just a convenient target?

The same thought has undoubtedly crossed the mind of anyone older than thirteen who has ever visited the City Museum and gazed upon its warren of tunnels, its seven-story tornado slide and, especially, the outdoor jungle gym comprised of material salvaged from destroyed buildings: "This place is a lawsuit waiting to happen."

Some people have even gone so far as to file actual lawsuits.

This past Monday, April 5, the City Museum decided to address the issues of safety and frivolous lawsuits in a public forum: its Facebook fan page:

We understand that by creating a place where kids and adults can run, jump, and play, that there is a risk for injury. We are constantly doing everything we can to mitigate that risk all the while trying to protect the integrity of the museum. What exhausts us are the people that see the museum as an opportunity to perpetuate insurance fraud.

Management, the statement continues, has posted numerous safety notices around the building. There are also cameras which management uses to look out for visitors' safety and, in some cases, to prove that some people threatening lawsuits were in no real danger:

Just to give you a quick glimpse into what we go through at the City Museum, a couple of years ago our rock fell 4 feet. The next day we had over 12 people call and tell us they were injured when the rock fell. To investigate these claims, we reviewed the video of the rock falling and we posted the video clearly showing that there was no one next to the rock when it fell on our website. When this was brought to several of the caller's attention they either hung up or changed their stories. 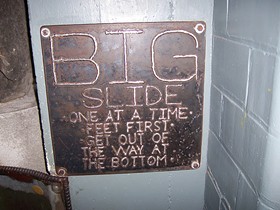 Three-quarters of the people who threaten lawsuits are adults, who, the statement notes, should be able to read signs telling them to go down a slide one at a time. They should also be able to report injuries to the museum staff at the time that they occurred instead of waiting five days.

You can read the whole thing here.

The post generated nearly 100 comments from Facebook users, most of them supportive, some of them inquiring about the lawsuits. Yesterday morning, the museum posted another note listing three of the more vexing suits:

1. Christina Ramage vs City Museum- It's your wedding night. You take the slide. Your husband, a body builder, doesn't wait until you clear the bottom and slams into you. The slide says "One at a time" and "Wait until bottom is clear."

2. Joli Sutter vs City Museum- You run and jump into the baby ball pit. Sign says "6 and under" and "Do not jump"

3. Timothy Walker vs City Museum - Your physical limitations should have told you that going down a slide, especially with knee problems in the past, is a bad idea

"Bob just got frustrated," explains spokesman Rick Irwin. "The majority of the lawsuits are frivolous. People look at any opportunity. We actually have an employee here who was sitting in a coffeehouse the other day and this guy came up to him and said, "Do you wanna make a lot of money? See that wet floor? I'm gonna fall on it and you can be a witness.'"

Irwin is considering calling up other organizations around town, like the Cardinals, and asking if this sort of stuff happens to them, too.

He's not sure how many cameras are around the museum but claims, "There are a lot more than there were four years ago." He also notes that the museum's slides were inspected last December by the state and "passed with flying colors."

"Bob is a recognized figure around the country to talk about slides and danger," says Irwin.

Irwin admits that he wrote the first, more measured, note, while Cassilly wrote the second, snarkier one. They haven't had contact with Rammage, Sutter or Walker who, because they are involved in lawsuits, don't want to talk.

In January KMOV-TV (Channel 4) ran an investigation of the City Museum, which noted that the museum has been involved in 26 personal injury lawsuits since 2004, more than any other institution in the St. Louis area. Cassilly refused to say how much the museum has paid out in damages and then attacked the cameraman.

"We have a lot of fans out there," says Irwin. "They always see the allegations, but we've never made a statement. We want them to know what we put up with. I've been yelled at leaving the building. People yell 'This place is dangerous!' and 'You're an asshole!' Maybe [Facebook's] not the best way to say it, but we're not going to take it anymore."