Claire McCaskill Makes a Boehner Joke on The Colbert Report 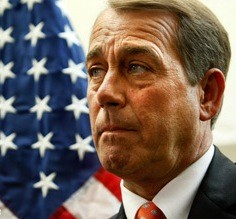 Image via
John Boehner not happy about the tanning salon tax in the health care bill
House minority leader John Boehner made himself the butt of many jokes when he proclaimed that the passage of health care reform was "Armageddon" that would "ruin our country," but Missouri senator Claire McCaskill had her own one-liner for the Republican from Ohio last night on The Colbert Report.

Referencing Colbert's remark earlier in the show that he got a suntan during last week's hiatus, McCaskill quipped about Boehner's fake-and-bake "orange" hue, drawing laughs from both the host and his audience.

Colbert added, "He looks like he tried to replace the core of a nuclear reactor, actually."

Mostly, though, McCaskill spent her five-minute appearance deflecting Colbert's tongue-extremely-in-cheek taunts that she was "one of the people who is destroying America."

He asked her what kickbacks she got for Missouri (awesomely going with the Mizz-ur-uh pronunciation) from the bill and McCaskill replied that the only thing she hoped to get for her state is "affordable, accessible insurance for everybody who wants it."

Watch the whole segment below to see Colbert call McCaskill a cheap date and ask her about about Missourian Rush Limbaugh moving to Costa Rica.
(Hat tip to The Pitch for posting this first)