Claire McCaskill Responds to WSJ's James Taranto: "There Is No War on Men" 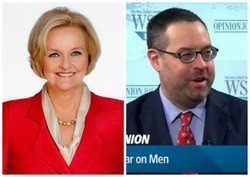 A little over a week ago, Wall Street Journal columnist James Taranto penned a mind-numbingly backwards column about Senator Claire McCaskill's efforts to combat sexual assault in the military.

McCaskill decided not long ago to block an appointment for Lieutenant General Susan Helms because Helms tossed out the conviction of a military officer for sexual assault.

McCaskill's actions, according to Taranto, is evidence of a "war on men" and "an effort to criminalize male sexuality."

Today, McCaskill answers in a new column for The Daily Beast titled "There is No War on Men."

Taranto's original column argued that the victim in the sexual assault case can't really be called a "survivor" because her behavior was "reckless," and therefore McCaskill's objection to Helms's appointment is unwarranted. He said in a video component of the piece that this all goes back to women's desire for sexual freedom and equality in the '60s. Read the original piece here.

(After Daily RFT wrote critically of Taranto, he turned his Eye of Sauron toward St. Louis, accusing this writer of "childishness" and "neoteny." To which we can only say, ideas that sound like they were cooked up by a twelve-year-old boy will be written about in the corresponding vernacular.)

Here is the first part of McCaskill's response to Taranto, published today:

I had reservations about responding to the multiple columns from the Wall Street Journal's James Taranto, in which he makes a lengthy and spirited defense of a convicted sex offender.

But, the sad fact is that Mr. Taranto's disregard for the severity of sexual assault is not nearly as uncommon as it should be--in either civilian or military culture. That one of the most respected and widely read papers in the country saw fit to repeatedly offer Mr. Taranto such a large platform is a reminder of how important our efforts, and those of many of my colleagues, to tackle the prevalence of sexual assault in our military, have been--and of how far we still have to go.

It's notable that Mr. Taranto spends little time discussing the actions of Lt. General Susan Helms--the commander in question, whose lifetime of service to the U.S. Air Force is worthy of our gratitude and appreciation. Instead, he re-litigates the facts of a case he didn't witness, comparing the recklessness of sending a text message or having a drink, to the "recklessness" involved in sexually assaulting another person.

Ultimately, in the sexual assault case he references against Capt. Matthew Herrera, the task of examining the evidence and hearing the witnesses' testimony doesn't belong to columnists or elected officials--it belonged to a judge and a jury--two words that you won't find in Mr. Taranto's piece.

Read the rest of "There Is No War on Men" here.