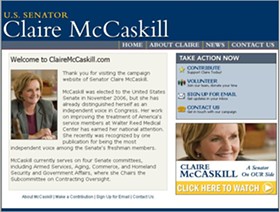 How much would you pay for this web domain?

From the Department of Why the Hell Didn't We Think of That?:

The Post-Dispatch reports that a Columbia-based web designer named Brennan Hobart noticed that Senator Claire McCaskill's website was called claireonline.com. Hobart suspected that the domain name ClaireMcCaskill.com was still up for grabs and jumped on it, presumably for about $10, which is the going rate for domain names.

The cost to the McCaskill campaign to rectify this oversight? $4,000, according to a financial report McCaskill for Missouri 2012 submitted to the U.S. Senate last week.

OK, so $4,000 isn't much compared to the $315 million AOL just dropped on Huffington Post, but then again, all Hobart did was fill out a few web forms and his credit card number. No web site design, no laboring over content, no agonizing over web hits. Maybe Hobart is onto something.

Alas, the Post also reports that most of McCaskill's potential challengers have already secured their domain names. But there's no reason why an enterprising political geek with a lot of time on his or her hands (it is February, after all) couldn't look at up-and-coming politicians in other states and go on a buying frenzy. Friends, there's gold in them thar uh, domain names!