Last month, the Missouri Alliance for Historic Preservation announced its annual list of the most endangered properties in the state, which included the James L. Clemens House in St. Louis -- a home constructed in 1860 that preservationists worry may not survive. Local activists have taken an increasing interest in the landmark in recent months, in part, because from the outside, it appears to be crumbling with no rehab plan in sight.

The fate of the Clemens House, built by Mark Twain's uncle, is now in the hands of developer Paul McKee, whose controversial, long-delayed NorthSide Regeneration project passed a significant hurdle in April with the Missouri Supreme Court ruling in his favor.

"We've invested a ton of money into stabilizing it, waiting for redevelopment," McKee tells Daily RFT. "That's a very, very important, strategic home and history on the north side here."

Located at 1849 Cass Avenue on the north side, the Clemens House is known for its Palladian-style villa with cast-iron ornamentation. It's one of the most intact antebellum mansions in the metro area, though its condition today is pretty rough. 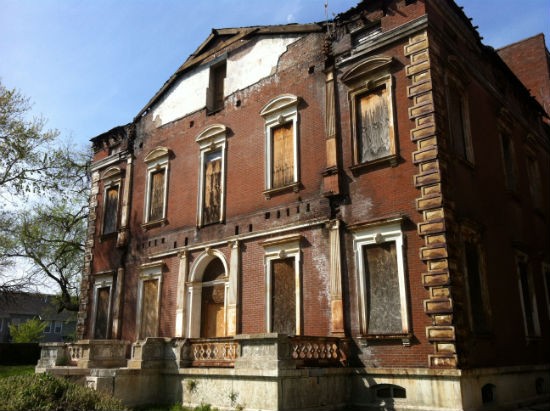 It was designed by architect Patrick Walsh for James Clemens, a businessman and the uncle of Samuel Clemens, a.k.a. Mark Twain. It's listed on the National Register of Historic Places and was also formally designated a city landmark in 1971.

Missouri Preservation, which designated it as an endangered property this year, says that it was sold to the Sisters of Carondelet in 1888, who then had a chapel addition constructed. It was later used by a number of Roman Catholic communities and charities, but its condition has deteriorated in recent decades.

McKee eventually took over and in 2009 promised a massive rehabilitation and redevelopment. But while stuck in a legal fight, little has been done to move any project at Clemens House forward. A roof on the nearby chapel has collapsed. A cast-iron façade has been removed.

"It just breaks my heart," Bill Hannegan, a St. Louis activist who runs the blog Keep St. Louis Free, tells Daily RFT. "My first love in life is architecture.... If St. Louis loses its most beautiful buildings, it's lost everything."

Hannegan, who works as a painter and specializes in old buildings, has been closely monitoring the condition of Clemens and has collected photos on his blog, which he has shared with Daily RFT.

Hannegan says it seems unlikely the property and its historic value could be salvaged at this point.

"I just don't think anything can be done with it now," he says. "It's just too far gone."

Michael Allen of the St. Louis-based Preservation Research Office tells Daily RFT, "It's one of the most important parts of our heritage, and it's just sitting, hanging in the balance."

Allen says, "If Paul McKee isn't the person to rehab it, we need to find the person who is."

Continue for more on Clemens House from Paul McKee and for more photos.