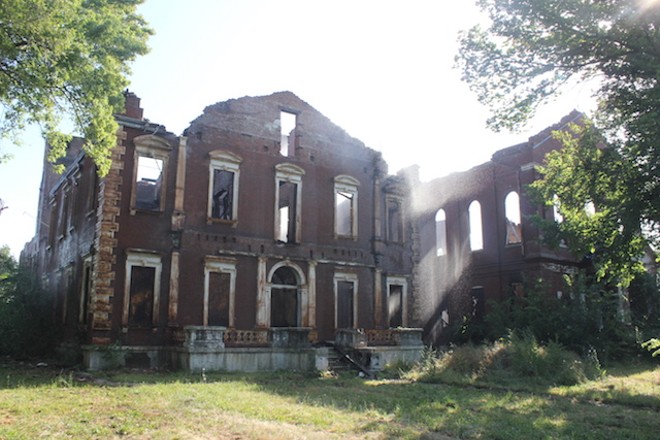 PHOTO BY DOYLE MURPHY
The shell of the house remained today, after an early morning fire.
After decades of neglect, a historic house that once belonged to Mark Twain's relative burned early this morning.

The James Clemens House built in 1858 was reduced to a crumbling shell after flames torched what was left of its roof. Wide swaths of brick walls collapsed at the rear of the old mansion, which was located at 1849 Cass Avenue.

The house, partially hidden from view by a brick wall and overgrown trees, was owned by controversial northside developer Paul McKee. It was already engulfed in flames when firefighters arrived. Between 3 a.m. and 4 a.m., fire commanders elevated the call to a second alarm and would eventually request a third alarm, attacking from all sides as flames raged high above the roof line.

Firefighters were still streaming water onto hot spots six hours later, well after the department's second shift had taken over.

Preservationists had long hoped for a better future for the house, which was named a city landmark in 1971. Samuel Clemens, who later became famous as author Mark Twain, is said to have visited the house multiple times when he was young, according to the city. James Clemens has often been described as the writer's uncle, but architectural historian Michael Allen says he was actually a second cousin to Twain's father, John Marshall Clemens.

James Clemens died in 1878, and his heirs sold the mansion to the Sisters of St. Joseph, who owned it until 1949. 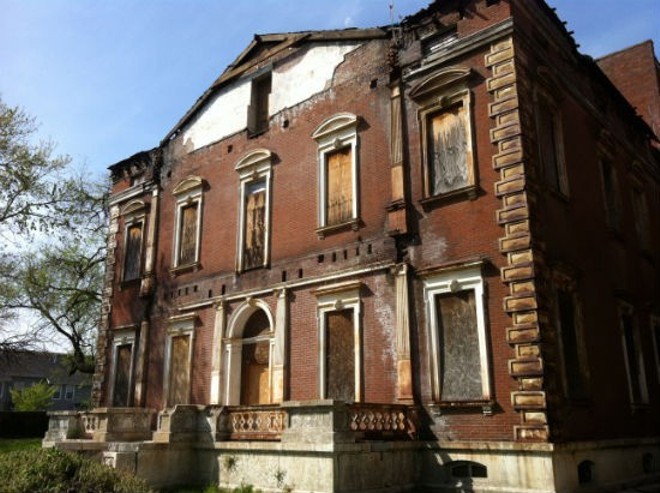 PHOTO COURTESY OF BILL HANNEGAN
The Clemens House in 2013.

Described as an "excellent example of the Greek Revival style" of architecture, the house has been vacant for years. Developer Paul McKee told the Riverfront Times in 2013 he was working to save the property. The RFT named the house "Best Old Building" in 2015.

"We've invested a ton of money into stabilizing it, waiting for redevelopment," McKee told us back then. "That's a very, very important, strategic home and history on the north side here."

But the restoration never happened, and the mansion continued to fall apart in recent years. Urban explorers warned the RFT last year that McKee had let the house go, to the point that giant holes had torn through the roof and rain pounded the floor below. Their photos show the carnage even before this morning's blaze.

McKee had promised to St. Louis Public Radio as recently as 2014 that he was working with a non-profit to save the house. Now it doesn't look like there will be much left to save. 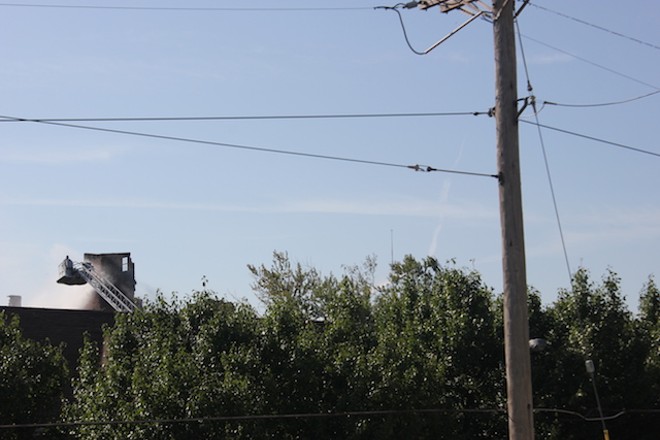 PHOTO BY DOYLE MURPHY
Firefighters could be glimpsed hosing down the structure earlier this morning.

Editor's note: The date of James Clemens' death and his relationship to Mark Twain were corrected after publication.