Color of Law: St. Louis officials have more power than ever to regulate public art 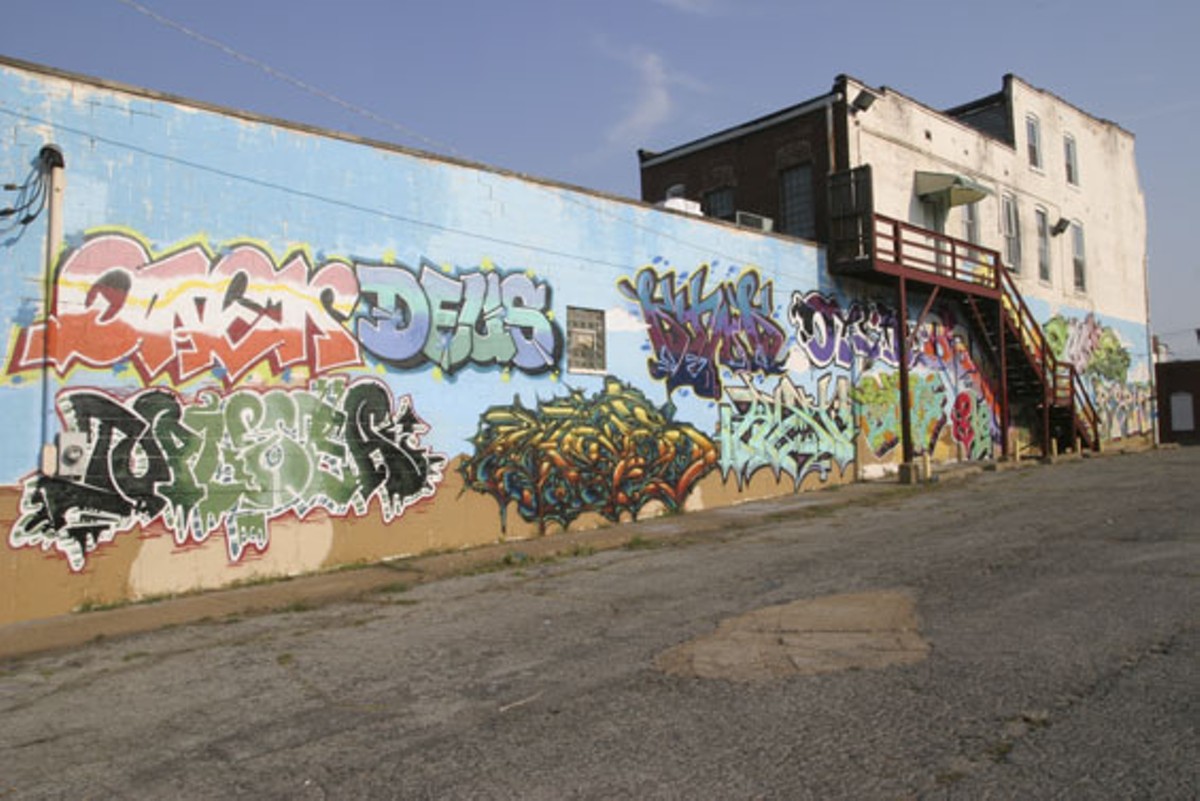 About twenty graffiti artists from the “LD crew” painted this mural at 3124 Cherokee Street on June 30. How much longer will it stay up? Nicholas Phillips

After sunset on a humid evening in July, Ruben Alejandre stands in the shadows of his parking lot at 3124 Cherokee Street, unsure.

Earlier this summer he allowed several graffiti artists to create a mural on the side of his music venue and eatery, El Leñador. Yet he didn't expect this result: an explosive collage of spray-painted signatures. Opinion on the street is divided: Is it high art or heinous?

"It doesn't look too bad," contends Alejandre, comparing it to the Latin Kings gang scrawlings he'd seen growing up in Chicago. "It's colorful. It's bright. But I don't know if it will work in St. Louis."

A few paces away, his bar manager, Johnny "Vegas" Moynihan, is more blunt.

"We were told it would be a scenic mural," he says, in between drags of a cigarette. "But instead it looks like the side of a railroad car."

On July 26 an agent of the excise division hand-delivered a letter to Alejandre that cited him for failure to abide by several conditions he'd agreed to when he set up shop in Craig Schmid's 20th Ward back in 2006.

The city faulted Alejandre for failing to install proper fencing and security outside his establishment and for operating past the agreed upon 11 p.m. weeknight curfew. Then, buried in the letter, another citation caught Alejandre off-guard: El Leñador's vivid mural was found to be in violation of a new sign code the board of aldermen quietly passed this summer that has granted the city more legal cover than ever to wipe out publicly visible works of art.

While Alejandre doesn't quite adore the colors that the graffiti artists swirled onto the side of his building, he positively bristles at the city's attempt to regulate them.

"This is art," he says of his mural. "Legally, the city cannot take this down."

Michael Bindas scoffs when he hears of St. Louis' new sign regulations. A Seattle-based attorney with the Libertarian-leaning Institute for Justice, Bindas has spent the past five years representing activist Jim Roos in his ongoing fight to keep his massive "End Eminent Domain Abuse" mural on a building near the intersection of Interstate 44 and Interstate 55.

Last July the Eighth Circuit Court of Appeals found that city's sign code was "impermissibly content-based." In layman's terms, it sought to control things such as Roos' painting but would leave alone a painting of equal size if it were, say, a flower. Thus it favored one kind of speech over another, which the judge's felt violated the First Amendment.

Now that the Supreme Court has declined to hear the city's appeal, it sits on the desk of District Court Judge Henry Autrey in St. Louis. He must decide whether the whole sign code must fall or whether the exemptions can be surgically removed.

But the city has not waited around for his advice. On July 18, without any fanfare, the board of aldermen revised the sign code by deleting the longstanding exemptions for crests, flags and artwork. This change removed the shield that murals enjoyed under the old law.

"Unfortunately, the city just made it worse for everyone by doing this of its own accord," says Bindas. "Speech is not the problem. Government regulation of speech is the problem."

Associate city counselor Matt Moak confirms that the sign code is now "majorly broad." But he assures the RFT that it's no cause for alarm.

"We don't want to be the art police," he says. "They've forced us into an all-or- nothing situation. We're revising our sign code so that it looks like we're going to be more aggressive, but actually, there are items we still don't want to regulate."

Yet Moak concedes it's a thorny task.

"If you try to draw a distinction — 'This is art, and that is not; this is graffiti, and that is not' — you run into problems," Moak says. "Legally, it's troublesome. It almost falls on the neighborhood to flesh some of this out."

Cherokee Street is split down the middle, with Ken Ortmann's 9th Ward on the north side and Craig Schmid's 20th Ward to the south.

Schmid did not respond to interview requests from Riverfront Times, but Ortmann did.

"I think every situation is different," Ortmann says of the new law. "It depends on what you call a sign. A sign to me is something that's advertising a product or a business." But art, he says, is different.

"My understanding is, if it's art, you don't need a permit. Though I'd like to change that, so that we know what's where."

Sign code aside, any city leader or cranky neighbor has another avenue to remove art on private property: They can label it "graffiti."

The paint was scarcely dry on El Leñador's east wall when, on July 2, two complaints came into the city's Citizens' Service Bureau. Both referred to the work as graffiti, which by definition, must be removed.

Under a 2005 anti-graffiti ordinance, crafted to battle gang tagging, a single complaint is all it takes for Brightside St. Louis, the city's public-private cleanup crew to swing into action. The agency (known to many as "Operation Brightside") followed up with a notice to Alejandre informing him of its intent to remove the mural within five business days. Meanwhile, a debate broke out online over whether it even qualified as art.

One commenter on the Riverfront Times website likened the mural to something you might find "on the back of a stripper in Tampa." Others defended it as an expression of the area's "hodgepodge" nature.

"It's eye-catching," commented board member Angelo Olegna, going on to point out the building's odd pedigree. "It represents Cherokee perfectly and how strange it is. And I believe we should stand behind each other as much as possible, so I personally support the mural."

Jeff Vines of STL-Style, a St. Louis-themed apparel company, concurred. "It's so much more interesting now," he said. From the front door of his shop, Vines and his brother and business partner, Randy, can glimpse the mural.

"Before it was one of the most unsightly edifices, and now it's one of the coolest," said Jeff Vines. "We don't want to go back to the blank wall. If it's this or nothing, then definitely I support it."

And so the mural remains.

A few weeks ago Operation Brightside placed the service request on hold to whitewash El Leñador after Alejandre called to protest that the "graffiti" on his building was, in fact, art — an extremely rare argument, according to Brightside's executive director.

"We've removed graffiti from about 120,000 locations [in twenty years]," notes Mary Lou Green. "I would say you could probably count on two hands the number of times people have said, 'Don't remove the graffiti.'" And most of those challenges, she says, had to do with homeowners not wanting people on their property. It wasn't out of fondness for the markings themselves.

Alejandre has also responded to the excise division's citation by bringing his operation at El Leñador into line with Schmid's special conditions: He's put up a fence and a bright light in the parking lot. He's shut down operations on weekdays, which used to be lucrative for the bar.

But he hasn't budged on the artwork outside.

"We can take it down as a friendly neighbor," he says. "But by force, no."