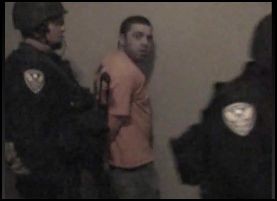 Jonathan Whitlock, seconds before realizing that police shot his pitbull.
All you Daily RFT readers have weighed in almost unanimously: the Columbia police SWAT team that raided the home of Jonathan Whitworth on suspicion of marijuana possession acted too aggressively when it shot his pit bull. (Check out the hair-raising video and our Tuesday Tussle debate part one and two).

Therefore, y'all will probably support the latest development: on Monday, Whitworth filed suit against the city of Columbia.

Whitworth is asking for unspecified damages in his 18-count complaint that includes constitutional violations, intentional infliction of emotional distress, and assault and battery.

More coverage in the Columbia Daily Tribune and The Maneater.