Coming Out in 1994 Nearly Cost Rodney Wilson His Teaching Job. Has Missouri Learned Anything? 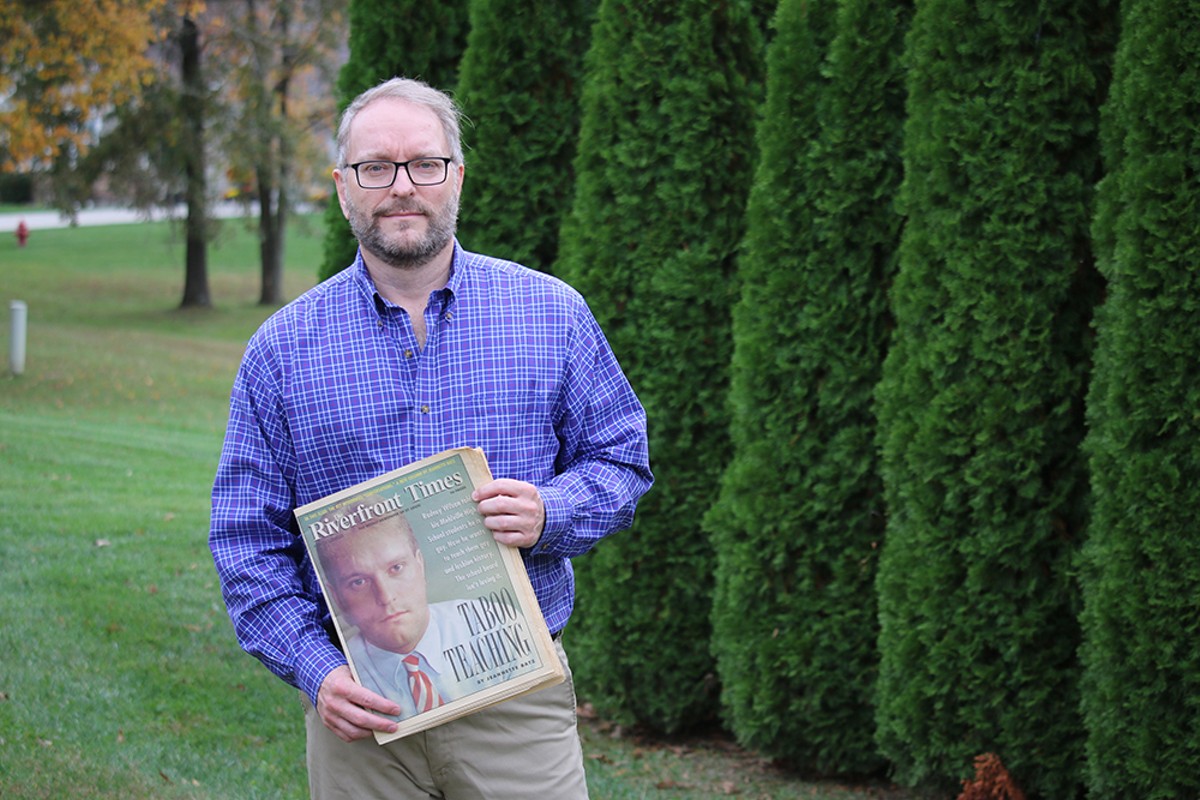 Rodney Wilson with a copy of the 1994 Riverfront Times story about his decision to come out — and the reactions it sparked. DAN STEADMAN

Room number 115 at Mehlville High School was decorated with posters in the spring of 1994. Student-made work hung alongside posters of Gone with the Wind characters Rhett and Scarlett kissing, as well as Jackie Kennedy and JFK. Escape from Sobibor, a dramatic retelling of a World War II concentration camp, was playing on the roll-in TV in a class full of fourteen- and fifteen-year-old social studies students. The class was discussing the Holocaust, and when the movie was over, teacher Rodney Wilson pulled out a poster of the patches Jewish people were forced to wear in concentration camps.

He pointed to a pink triangle on the poster and looked at his class.

"If I was alive during this time, I would be wearing this patch, because I am gay," Wilson told the students.

It's a moment that made the Riverfront Times' August 3, 1994, cover story, sparking rage in parents at school board meetings when they discovered what Wilson had told their children.

Students in the class at the time say it didn't seem like a big deal back then, but now they see the impact of Wilson's words. Dana Workes, who was in class that day in Mehlville, tells the RFT what Wilson did paved the way for change.

"He stepped out and spoke his truth in a way that was definitely appropriate to the lesson. He didn't make it a big announcement that it was about him, but at the same time he opened the door to conversation," Workes says. "He showed authenticity; he connected with his students in doing so. It was the beginning of a new chapter that he would continue and still continues to have this position and to this day, in terms of speaking out and being an advocate and pushing for equality and acceptance and learning."

It was a moment that shifted Wilson's career path, and it continues to affect his life nearly 30 years later.

Ultimately, Wilson was not fired. He went on to win his tenure a year later and worked for the school district until 1997.

"When I left Mehlville, initially I wanted to do something a little different," Wilson tells the RFT now. "Those years, 1990 to 1997, they took a lot of energy."

His post-Mehlville journey took him to Massachusetts, where he taught GED classes in jails, and then to a Puerto Rican learning center, where he taught English to Spanish speakers. Then Wilson returned to Missouri. Each October, he participates virtually in presentations and events for LGBTQ History Month, a topic that Mehlville School District once didn't allow him to discuss in front of students.

In the RFT's 1994 story, Wilson had called a "shift toward justice" inevitable.

"Young teachers like myself are not going to be closeted anymore," he said at the time.

Then-RFT staff writer Jeannette Cooperman wrote in 1994 that Wilson clarified himself swiftly, saying he wasn't advocating for a "radical overturning of the system." He said he was aware of gay history and African American history, and he was inclusive of that. He pointed to the Gone with the Wind posters of Rhett and Scarlett, saying he celebrated hetereosexuality and there was nothing gay about his classroom besides the rainbow flag.

It wasn't enough for parents back then. In the weeks that followed the RFT's coverage, parents like Doris Hinsen went to school board meetings and demanded that Wilson essentially go back in the closet — there was to be no talk about his sexuality, they insisted, because Wilson would indoctrinate the kids into homosexuality. They called for him to be fired. In the board meetings, some parents declared homosexuality "unnatural," and others begged the board to "keep the district a good district."

Flash forward to 2021, and the same battles are still happening in school districts across Missouri. Wilson tells the RFT it's "disappointing" that these issues are still being debated nearly 30 years later. He points to the case of John Wallis as an example of history repeating itself.