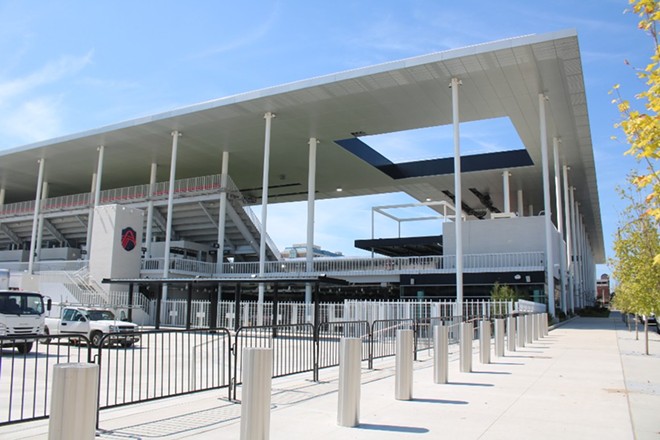 Monica Obradovic
St. Louis City SC's Centene Stadium has had to reschedule a second match due to construction mishaps.

St. Louis' new soccer stadium has never hosted a game, despite the club's developmental team being slated to play there Sunday. Now, a scheduled match for this weekend has also been moved to a new venue. Newly reported information gives more of an idea as to why.

A record request submitted to the City of St. Louis by Fox 2 News found that a construction crew struck two underground utility conduits as they tried to install streetlight conduits on September 2.

St. Louis Soccer Club's reserve team, St. Louis City SC 2, was originally slated to play at the soccer stadium in downtown west for the first time on Sunday. The game's venue switched to Southern Illinois University instead, as repairs to the construction mishap have lagged on. The team's next game, scheduled for this upcoming Sunday, will also be relocated.

St. Louis City Soccer Club, or CITY SC, has previously blamed a separate, unrelated construction project for why the Centene Stadium isn't ready for play. Last week, officials said the unrelated project had "adversely affected" the stadium's power system, though no specifics were given. St. Louis City is constructing a new section of 22nd Street near the stadium.

An engineer's report included in Fox2's record request noted the damaged conduits were never marked by Missouri One Call or Dig Rite services, and the stadium's construction team did not alert the city street workers of the conduits either.

Soon after the conduits were damaged, a cause-and-effect reaction ensued. Rain water damaged the conduits further, and the water found its way into a power station under the stadium's southwest corner, according to Fox2's report. The water then fried a couple of main breakers.

It's unclear how long it will take to repair the damage, but in the meantime, STL City 2's next game is scheduled for the Ralph Korte Stadium in Edwardsville, Illinois.