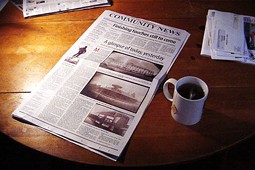 http://www.flickr.com/photos/blackcustard/ / CC BY-SA 2.0
Another year, another push-back against the Interweb's free-for-all ethos: the Pantagraph over in Bloomington, Illinois just executed a weekend cooling-off period during which comments on local stories were suspended.

To justify the move, editor Mark Pickering wrote that local stories had elicited far too many comments that were:

offensive and devoid of civility, the worst of which include personal attacks and/or assertions that have nothing to do with the story...This "cooling off" period is meant as a strong reminder to our online readers:  that the reason comments are allowed in the first place is to foster a "spirit of community involvement and conversation."

He doesn't cite it, but we suspect he's talking about discussions such as this one. Readers' reactions were mixed (see here). Pickering was singled out a few times, but this was nothing like the Kurt-Greenbaum-inspired locust storm.

By the way, in case you think that one's totally over: just a couple weeks ago, David Nicklaus of the Post-Dispatch did a blog post on November job losses that drew 39 comments. About thirty-four were about a certain job loss caused by Kurt Greenbaum...