Jayson Stewart made national headlines when he promised to give every Cool Valley resident $1,000 in bitcoin

THEO WELLING
Jayson Stewart is the mayor of Cool Valley.

The Cool Valley City Council plans to hold a hearing to impeach and remove Mayor Jayson Stewart on January 25. Last month, the council voted on charges that Stewart has allegedly refused to follow council directives, including refusing to share city financial records, disclose the whereabouts of $230,000 in COVID-relief funds and return a city-owned police car and gas card.

The city of 1,100 people, near St. Louis Lambert International Airport, has hired St. Louis attorney Paul Martin, at a fee of $250 per hour, to prosecute the case against Stewart, a job that includes presenting evidence to support the charges against the mayor.

Three of the four council members must vote to remove Stewart before he loses his job as mayor, a part-time position that pays $300 per month. Stewart, who is responsible for his own legal counsel, may appeal the impeachment and removal vote to a St. Louis County judge.

Stewart, 32, did not return calls seeking comment. His clashes with the city council were the subject of a Riverfront Times cover story. 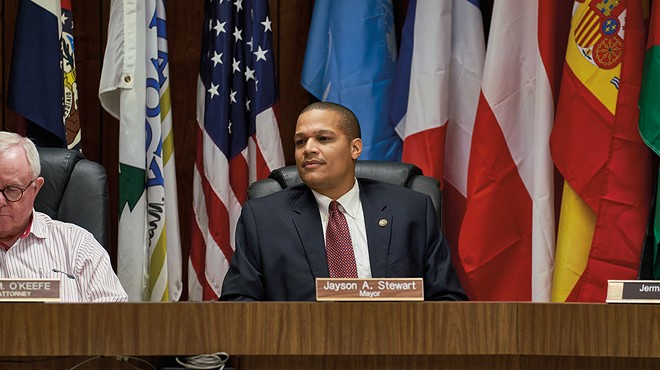 A St. Louis County Mayor Went Big for Bitcoin. Now He's Fighting to Stay in Office: Cool Valley's Jayson Stewart is at odds even with the people who voted for him


In the fall of 2021, Stewart won national attention when he proposed giving every Cool Valley resident $1,000 worth of bitcoin, the cryptocurrency, as a way to build up private wealth. At the time, each bitcoin was worth $60,000. Now the value of an individual bitcoin has fallen to less than $17,000.

Stewart never revealed where the money for the bitcoin give-away program would come from, other than to say the source would be a wealthy benefactor.

The council approved 13 individual charges against Stewart during a December 21 meeting. The charges center on Stewart’s refusal to obey council directives. Stewart allegedly:

Stewart is a graduate of the prestigious John Burroughs School in Ladue. He won the Cool Valley mayorship in April 2020 in a landslide. His LinkedIn profile states that he ran a successful recording studio and then a St. Louis-based company called PL28, which aimed to clean plastic trash from the ocean. It remains unclear if PL28 had any employees or made any money.