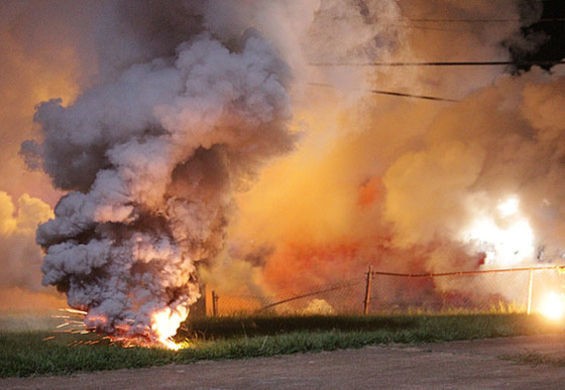 Danny Wicentowski
One of the many tear-gas canisters fired on Ferguson this month.

A Velda City police officer who has been part of the militarized police apparatus holding down operations on West Florissant Avenue is spreading lies about Ferguson protesters online.

Sergeant Mike Weston, going by the handle "officeranon2" on Twitter, engaged with users of the social-media network about a tear-gas attack by St. Louis County police on protesters in their own back yard on Monday, August 11. In the conversation, a Twitter user wanted to know why police would fire tear gas at people on their own property. Weston tells them it's because protesters were firing guns from their back yard. But that's not true, as evidenced in the video below.

Daily RFT was in the back yard that was tear-gassed and caught the incident on video. No shots were ever fired anybody in the back yard, and each person had their hands up in protest.

See the original story here: Police in Ferguson Fire Tear Gas on Protesters Standing in Their Own Backyard

Daily RFT contacted the Velda City Police Department, and Weston confirmed the account was his and explained the allegations he made against Ferguson residents who were attacked with tear gas on their own property.

"I wasn't spreading misinformation," he said. "There were shots being fired some yards, maybe not this particular one."

Weston then admitted that he wasn't in the group of police officers that was marching down the street and firing tear gas into yards. He said he was in the back closer to the command center, several blocks away.

Although Weston claims shots were fired from "some yards," that wasn't the reason that the St. Louis County Police Department gave for this tear gas attack.

Sergeant Colby Dolly, the chief aide to Police Chief John Belmar, said they used tear gas in the video because the people in their back yard looked like they were up to no good.

"The behavior of the individuals on the video would indicate their intent was something other than peaceful behavior," Dolly wrote in an email last week.

He further explained that because there had been looting the previous night, the police didn't feel comfortable with people being out in their back yard.

"Keep in mind, there was blatant disregard for property rights the last two nights, and officers had little information to determine if a person was rightfully on property, therefore the commands to disperse were given," he wrote.

In the same Twitter conversation of the backyard attack, Weston also gives a simple reason why tear gas was lobbed at an Al Jazeera TV crew last week: The police were just trying to save them, and sometimes bad things happen in a "war zone."

Weston's Twitter feed, which was deleted moments after he spoke to Daily RFT, also has some other insights into the mind of an officer working one of the strictest security details for a street protest in American history.

Click on the next page for more cop tweets about "thugs" and punching Eric Holder in the face...