Cops: David Sheridan Throws Girlfriend Out of Speeding Car on I-64, Leaves Her Unconscious 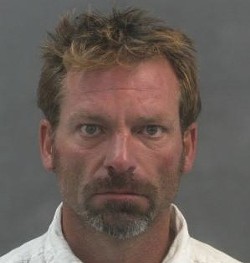 Update: Police have charged David Wayne Sheridan, 46, in the horrible assault case on Interstate-64 that left a woman seriously injured over the weekend. Our original coverage of the incident is below.

Sheridan, according to a probable cause statement from the St. Louis Circuit Attorney's Office, pushed his 34-year-old girlfriend out of the speeding car he was driving onto the highway while driving eastbound on I-64 and Kingshighway just before midnight on Friday. When an officer arrived, he saw the suspect on the scene attempting to push the woman "over a chain link fence separating the highway from the neighborhood," the report says.

The victim was "bleeding all over and had obviously sustained serious injuries," the charges say.

Cops arrived in response to a 911 caller who allegedly saw Sheridan push her out of the moving car.

On the scene, an officer tried to arrest Sheridan, who resisted and kicked the cop in the shin and chest, the statement says.

Meanwhile, his badly injured girlfriend was taken to Barnes Jewish Hospital to get treatments for "abrasions all over her body, many of which go all the way to the bone, leaving it visible," police say.

The woman was able to tell cops her side of the story. From the probable cause statement:

She told me that she was in a car her boyfriend, defendant was driving. They began to argue and he reached across her, opened the passenger side door, and pushed her out of the moving car. She estimated that the car was travelling 65 miles per hour. She lost consciousness and when she regained it, she was lying flat on her back, with a car narrowly missing running her over. At some point, the defendant returned to the scene and demanded that she say she jumped out of the car when the police came. The defendant then attempted to remove [the victim] from the highway so she would not be there when the police arrived.

Sheridan is facing charges of first-degree domestic assault causing serious injury, resisting or interfering with arrest and assault on a law-enforcement officer.

He has an aggravated battery case on his record from 1993.

Here's the full statement followed by our original coverage from earlier.

Original post, 7 a.m.: A 34-year-old woman is in serious condition after police say she was thrown out of a moving car on the highway in what appears to be a horrible domestic assault incident.

The St. Louis Metropolitan Police Department reports that witnesses saw her thrown from the car at around 11:50 p.m. on Friday evening on Interstate-64 (40E). A 46-year-old man who was apparently driving the car sped off. Soon after, however, the suspect returned to the scene and was "extremely belligerent" when cops confronted him, officials say.

The woman meanwhile suffered from multiple injuries and was rushed to the hospital.

She was in serious, but stable condition over the weekend, police say.

The man, who police have not yet identified, allegedly failed to comply with officers' instructions. Eventually he was arrested and could face charges of first-degree assault, third-degree assault on a law enforcement officer and resisting arrest.

It's unclear how the suspect and victim were related or how exactly she was thrown from the car. We'll update when there's more information available.

Incident: Assault 1st (Domestic), Assault 3rd (LEO), Resisting
Location: I-64 (40E)
Date/Time: 8/16/13 @2350
Victim: 34-year-old white female
Suspect: 46-year-old white male
Witnesses observed the victim being thrown out of a moving vehicle on the highway. The vehicle then continued driving eastbound out of sight. The suspect then returned to the scene on foot prior to the officers' arrival. As officers approached, the suspect became extremely belligerent and failed to comply with the officers verbal directions. The suspect was arrested. The victim suffered multiple injuries. She was transported to an area hospital where she is listed in serious/stable condition. The investigation is ongoing.