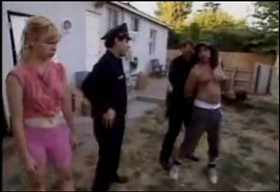 Image via
Run Ronnie, run!
We've been waiting for SO long, and now it's really happening!

"Cops," America's oldest reality show, is coming to the Missourah Ozarks for the first time ever, according to the News-Leader.

A quick visit to the show's page over at IMDB reveals that the "Cops" film crew has only been to Missouri one other time: when they followed police around Kansas City.

But this is the first time in the Ozarks (the only other location nearby appears to be Little Rock, Arkansas).