Cornell Hampton: Helped St. Louis Woman Get Car Out of Snow Then Raped Her, Say Police 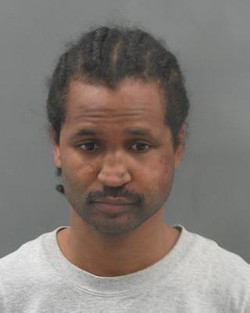 Cornell Hampton: Police say they pulled him off the victim.
You may want to think twice of letting a stranger help push your car out of the snow after reading this horrific story.

St. Louis police report that a woman in the Central West End was trying to get her snow-bound vehicle onto the road near the intersection of Newstead and Lindell last Thursday when Cornell Hampton came by to offer assistance. Once clearing the car from the ice and snow, police allege that Hampton jumped into the vehicle, put the 23-year-old woman in a choke hold and demanded her to drive.

They ended up several blocks away, in the 4100 block of Delmar, where Hampton, 38, allegedly forced the woman into a vacant building.

Witnesses hearing her screams and seeing the woman pushed into the building called police. The cops arrived minutes later and say they caught Hampton in the act of raping the woman. The police report that Hampton kicked at them and resisted arrest -- which may explain the bruising on his nose and cheek in this mugshot.

He's being held on a $300,000 cash-only bail on charges of forcible rape, forcible sodomy, assault and resisting arrest. The victim, meanwhile, was taken to the hospital where she was treated for sexual assault and minor injuries to her face, neck and chest.