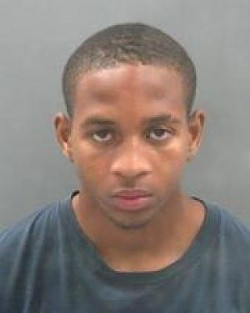 Cornell McKay's mugshot from his August 2012 arrest. His lawyers say he was framed.

Eighteen-year-old Keith Esters murdered Megan Boken on August 18, 2012 in a brazen daylight robbery gone wrong in the Central West End. He pleaded guilty to second-degree murder back in November and a judge later sentenced him to 50 years in prison.

But attorneys for a man arrested for a similar armed robbery that occurred eight days before the murder -- August 10 -- claim police ignored key evidence gathered in that crime that could have prevented Boken's death. Furthermore, the attorneys allege that police are covering up their "lethal mistake" by framing an innocent man named Cornell McKay.

"Everybody in here knows I didn't do that robbery. Everybody in this jail knows," McKay told Daily RFT from the visiting room in the St. Louis City Justice Center.

That may sound like standard jailhouse talk, but the facts of the case do raise questions.

On the evening of August 10, 2012, a young black man with a gun robbed a woman in front of her North Boyle Avenue condo, taking her cell phone and $50. The St. Louis Metropolitan Police Department's Ninth District took the case. Eight days later, Boken was shot to death in her car, not far from the location of the August 10 robbery. Homicide detectives took that case.

Two days after the murder, Ninth District detectives identified McKay as their main suspect and believed he may have been responsible for Boken's murder as well. Homicide detectives interrogated him.

But he had an airtight alibi for his whereabouts the night of Boken's murder: McKay had been staying in the tiny town of Washington, an hour west of St. Louis, that entire week, at work for a graphic design company. He'd also grown close to a church there. The church's pastor, a former cop named Chris Douglas, treated McKay like family and let him live in his basement.

"He worked every single day," says Douglas, who met McKay in July 2012 when the teenager was taking a GED class at the St. Louis County Covenant House. "We went camping that weekend. He sang all three services, in front 750-plus people at the church."

Douglas says he got a call on the 20th from McKay's mother.

"We heard there was a violent crime over the weekend and they had information that Cornell was involved."

Douglas and McKay arrived at the Ninth District headquarters on the morning of August 21 to turn McKay in voluntarily. McKay was immediately arrested. The next day, homicide detectives questioned him and, according to court documents, administered a polygraph test regarding the murder, which McKay passed.

Megan Boken, shown here during her days as SLU student/athlete. She was murdered by Kieth Esters on August 18, 2012.

On August 22, four days after the murder, homicide finally zeroed in on Esters. They broke the case using a cell phone they'd recovered -- the one stolen on North Boyle Avenue in the August 10 robbery.

Phone records showed multiple incoming calls just minutes after Boken's murder at 2:20 p.m., and police were able to link those to Esters' girlfriend. She later told police that Esters had called her on August 18, saying he'd robbed and killed someone. Police arrested Esters on August 23, and both his accomplice and an eye-witness later ID'd him as the shooter.

But the matter of the August 10 robbery remained. By the time police took Esters into custody, McKay had already been positively ID'd by the victim, arrested and charged. He was found guilty for armed robbery on December 12, 2013. [Corrected]

The new motion filed by McKay's attorneys Robert Ramsey and Thomas SanFilippo argues that all evidence points to Esters being the robber on both August 10 and 18. Ramsey says that his client McKay has been victimized by a crooked police investigation run by detectives who are trying to cover up their responsibility for Boken's death.

"It's a hell of a reason why these guys were so determined to put the case on Cornell McKay," Ramsey tells Daily RFT. "Because if they had arrested the right guy, Megan Boken would be alive right now. That is very powerful."