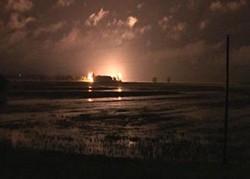 Army Corp of Engineers via KFVS
Explosives detonate the Birds Point levee last night.
The final decision to breach the Birds Point levee along the Mississippi River came at 5 p.m. yesterday. Five hours later, explosives lit up the night sky and shook the earth as the U.S. Army Corps of Engineers detonated a blast in the levee that will flood some 130,000 acres of southeastern Missouri farmland in order to save the historic (and dying) town of Cairo, Illinois.

Moments after the explosion, the effort appeared to be working, with water levels on the nearby Ohio River that borders Cairo dropping immediately. Per KFVS in Cape Girardeau:

The Corps plans to blast another hole in the levee today near New Madrid, Missouri (some 40 miles south of Cairo) to eventually let the flood water return to the Mississippi River.

Below is a brief video of the blast.