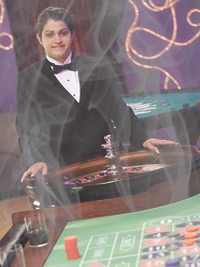 cdc.org
The Missouri Gaming Commission is expected to announce Wednesday which city will be awarded the state's 13th and final casino license.

The first -- mentioned here earlier this month -- is a bill that would exempt Illinois casinos from that state's blanket smoking ban on businesses and public places. The second is a local measure up for vote this April in Cape Girardeau that would ban smoking in most businesses in the southeast Missouri city -- including "gaming facilities."

Last week, smoking-ban opponent Bill Hannegan sent a letter to Missouri gaming regulators pointing out the pending legislation and warning them that a smoke-free casino in Cape Girardeau just couldn't compete with smoking establishments in Illinois and Missouri.

This morning, the city government reporter for the Southeast Missourian echoed those similar concerns, fretting that Cape's casino bid could go up in smoke.