Gov. Mike Parson has made it clear that Missouri is not getting a statewide mask mandate. But a new study from Saint Louis University found that even the patchwork system of local mask mandates led to a "significant" reduction in the spread of coronavirus in St. Louis and St. Louis County.

Compared to the bordering counties of St. Charles, Jefferson and Franklin that do not have mask mandates (Franklin has since issued a mandate that went into effect as 12:01 a.m. today), the daily average coronavirus growth rate in St. Louis and St. Louis County was 40 percent lower after their governments imposed mask mandates, the study found.

Shacham acknowledges that the case growth rate is usually just one part of the constellation of data that health researchers use to track current outbreaks and their effect on local health systems. It's also impossible to know exactly how many people followed the mask mandates. But she points out that the study didn't just find that mask mandates work, but that their effectiveness lasted even as infections rocketed in the counties next door.

And by comparing the virus' growth rates in those counties, researchers found a sharp correlation with the presence of a mask mandate. As a control, the study started by evaluating the three weeks before St. Louis and St. Louis County instituted their mask mandates on July 3. 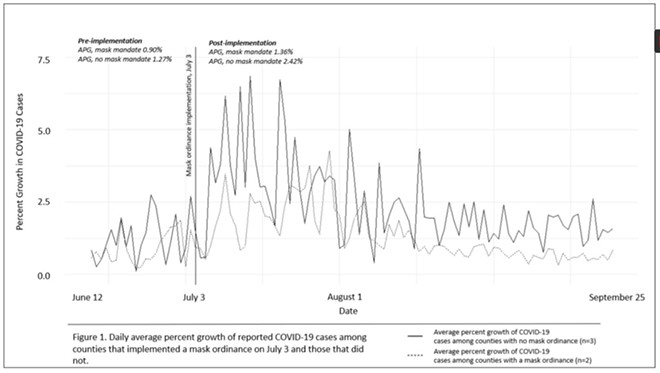 SAINT LOUIS UNIVERSITY
The left side of the graph shows data during the three weeks before the passing of local mask mandates.
The two groups of counties, those with mask mandates and without, had very different experiences over the next three months, researchers observed.

The resulting map of that comparison appears stark: The three counties that did not impose mask mandates saw percent increases in their COVID-19 cases measured in four digits, with St. Charles at 1,235 percent, Jefferson at 1,573 and Franklin at 1,438. The city of St. Louis "only" quadrupled its numbers, while St. Louis County's growth hit 472 percent. 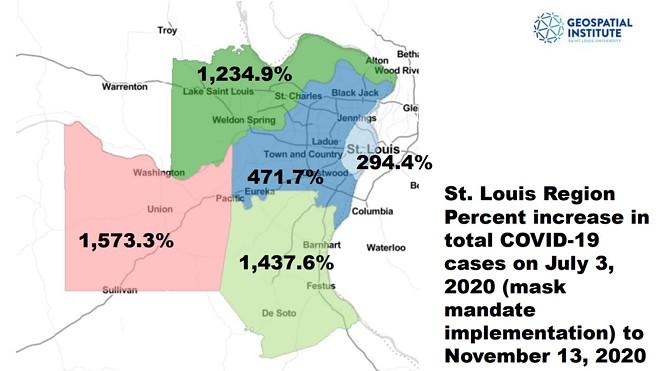 The study strengthens the case of medical experts who say masks are a fast and cheap way to reduce infections. Last week, the results were featured in a CDC "COVID-19 Science Update" newsletter, and the study itself is undergoing peer review before publication.

One of the study's authors, Dr. Alex Garza, is also the incident commander for the St. Louis Metropolitan Pandemic Task Force. In an interview with RFT, Garza said the study showed that mask mandates aren't a "failed policy" just because the neighboring counties don't chip in.

"If anything, it’s the right policy," he says, "but it’s been impacted too much by all those other communities that don’t have a mandatory masking policy."

Because it's not just St. Louis and St. Louis County patients filling metro hospital beds, but "collar county" patients as well. Last week, Garza called on Parson to heed calls from medical experts and hospitals and to institute a mask mandate statewide, speaking emotionally about the impossible situation facing health care workers who "have no backup" to care for the surge of patients. It's a surge that, as Garza and others maintain, could be mitigated if Parson would do what even other conservative governors have done when faced with buckling health care systems.

That solution, a statewide mask mandate, was the subject of several questions directed at Parson during a Thursday press conference. In response, however, the governor emphasized the need for personal responsibility and instead recommended a combination of mask wearing, handwashing and social distancing "to curb this spread."

Even if Missouri's hospitals and health workers are calling for mandate, Parson maintained that, in the face of a pandemic that's driven doctors to the breaking point, the key is personal responsibility.

"I've talked to infectious disease doctors every week," Parson said. "If you look at it from a medical perspective, they have a different view than what I do as the governor of the state Missouri."