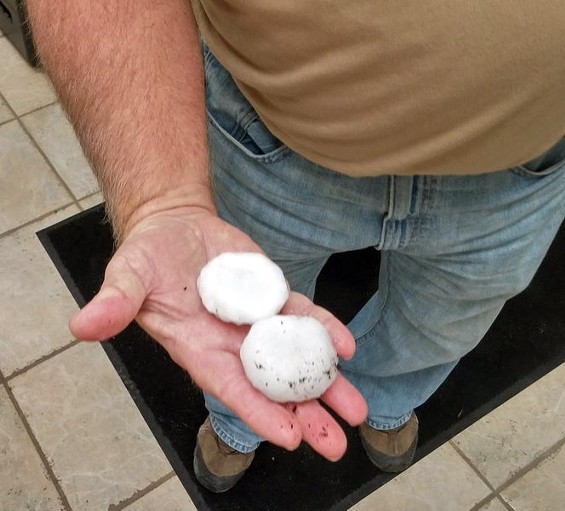 Cassandra Langley
Property manager Rick Schmitt holds some of the biggest hail from this morning's storm.

Welcome to this very gloomy Tuesday, and may we suggest you put your car in the garage if you're out in the far west-county area? There's an angry storm system churning through St. Louis, bringing with it plenty of hail -- some ice chunks are as big as golf balls.

Out at the Innsbrook Resort near Wentzville, administrative assistant Karen Denson says the staff scrambled to get all their vehicles under some kind of shelter.

"It was pretty dramatic," she says. "It started hailing little, and just kept getting bigger and bigger."

The storm got so bad, she says, the hail actually took out a couple of security vehicles' windshields. Here are some of the craziest hail photos we've seen from around the area.

According to KSDK (Channel 5), hail is raining down in Marthasville, Wright City, Augusta, Eureka and Rosebud. Here's the latest from the National Weather Service:

A severe thunderstorm was located near Ellisville and moving east at 30 MPH...Half dollar size hail has been reported in Wildwood. People and animals outdoors will be injured. Expect damage to roof, siding, windows and vehicles.