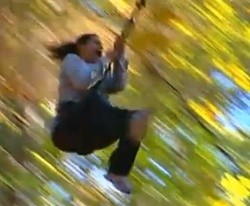 When we first wrote about the proposal for a treetop adventure course in Creve Coeur Park this month, we said it sounded pretty friggin' cool.

We did not, however, give much attention to the bird lovers who apparently made quite a fuss at the St. Louis County Council last night about the damage this zip line adventure project could cause wildlife.

Said one angry resident, "I do not know how you can live with yourself knowing that you destroyed a beautiful nature area -- all for the almighty dollar."

Were their protests successful?

"We have very simple, logical reasons to be expecting impacts to the birds and their habitats," Mitch Leachman, executive director of the St. Louis Audubon Society, tells Daily RFT. "That's why we were asking for an environmental assessment."

Despite what the Post-Dispatch has described as "vociferous opposition," the council approved the proposal, which means it will move forward. As we reported, the Parks Department of the county is hoping to get the adventure course, from a company called Go Ape, set up this spring. It would cost $55 for an adult and $35 for a child.

Leachman argues that there's very little information out there about how these kinds of treetop courses impact natural habitats -- and no concrete details on the potential effect it could have on birds in Creve Coeur Park.

"This type of activity hasn't been around a very long time," he says. "Regardless of the type of disturbance...this specific location has not been studied."

Leachman says that there's a tendency with birds to "assume that they will find another place [because they can fly].... But there is no guarantee. We just don't know."

"There are birds that are at risk, endangered populations," he continues. "How many different times do we allow habitats to be degraded, destroyed, compromised or totally eliminated?"

He says that out of sixty county parks that could house this project, Creve Coeur is one of only four that has what is called an "important bird area" designation. He says over 200 different species have been observed nesting, feeding and stopping by in the park -- and that bald eagles are seen regularly.

When we last spoke with Tom Ott, director of the county's Parks and Recreation Department, he argued that it would be a fun, physically challenging course that would be a great addition to park activities in St. Louis. And in response to the initial criticisms, then, he pointed out that the company works to enhance existing wildlife and minimize impact. He also said that the project would take up just a few acres in the 2,114-acre park.

These arguments are apparently not quieting the dissenters.

Leachman, who attended the meeting last night, says there was a great deal of backlash.

"They are very upset," he says. "Their frustration is at least as much about the lack of outreach and community engagement as it is about the proposal itself."

Continue for a video and photos of the proposal.