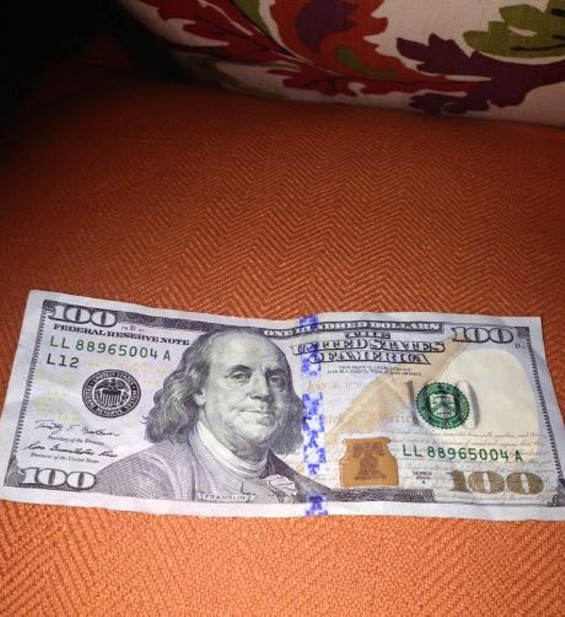 All photos courtesy of Wendy Reich
Hey car thieves, we think you dropped something...

Last week, while rooting around in the back seat of her Jeep Grand Cherokee, Wendy Reich spotted what she thought was a dollar bill poking out from beneath the floor mat of the driver's side passenger seat.

Lifting the mat, she found herself face to face with Benjamin Franklin.

A lucky find, right? But Reich isn't the kind of person who has hundred-dollar bills floating around willy-nilly, and she certainly didn't remember losing the cash. There was only one explanation: The bill must have been left by the thieves who jacked the Jeep more than five months ago.

Reich's Jeep was stolen on Thanksgiving Day, which is the kind of blunt injustice -- a cosmic slap in the face, basically -- that can shake a person's belief in the goodness of their fellow humans.

Such was the fate encountered by Reich and her husband on November 27, 2014, after a quick stop by Riley's Pub in the city's Tower Grove neighborhood that evening.

"We went in, had a beer, came out and the Jeep was gone," Wendy says. "It was the strangest feeling in the world."

The Reichs' white Grand Cherokee had disappeared from a parking spot on Arkansas Avenue, the same spot they'd used for the past nine years during their weekly visits to the bar, which is just east of South Grand.

The theft capped a rough year for the Reichs. They had just moved to their "dream home" in Tower Grove South after spending almost a decade in Tower Grove East. But the old house just wasn't selling, and the resultant money crunch put them in a bind when the lease expired on Wendy's car. As luck would have it, they were able work out a deal in October to buy the Jeep from a friend.

That luck ran out about four weeks later, Wendy says.

After Thanksgiving dinner, the couple decided to visit Riley's Pub, their favorite bar. They wanted to lend moral support to its owners, Wendy says, who had been forced to board up the bar's windows after vandals smashed storefronts following the grand jury's decision not to criminally charge former Ferguson officer Darren Wilson for killing Michael Brown.

But that night they ended up being the ones who needed moral support. After discovering the Jeep missing, Wendy and her husband reported the incident to the police.

Three days later, officers found the vehicle in an alley in Dogtown, drivable but badly damaged: The area around the right rear bumper was crumpled and wires hung from the exposed left headlight. The front bumper was totally gone. 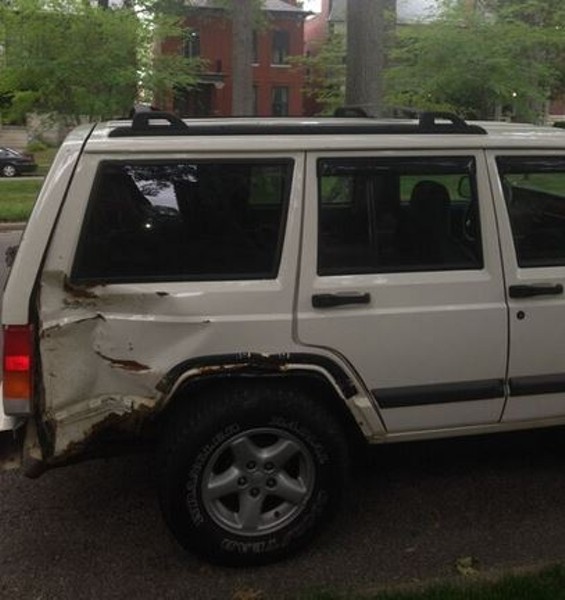 The Jeep, shown here after it was recovered.

On the floor near the driver's seat, Wendy found plastic baggies that appeared to have been knotted and ripped open, suggested they'd been used to package drugs. She also found a CD with someone else's bootlegged rap mix.

One of the knotted-and-torn plastic bags found by Wendy.

Police told her they'd spotted four teenagers running away from the Jeep, but that they'd gotten away.

"My son's car seat was gone, my beautiful winter coat that I was was just in love with, my Nikes," Wendy says, cataloging the losses. "We were pretty down."

Wendy's husband was able to repair some of the damage, but they still had to put another $3,000 into the Jeep. The front of the vehicle now features a replacement panel, even if it's the wrong color. The rear, though, still still resembles a crumpled soda can.

Months after reuniting with the Jeep, Wendy was understandably shocked to find the hundred-dollar bill lurking under the floor mat.

Considering the likely source of the bill -- drug-possessing car thieves -- Wendy was first paranoid that the bill was counterfeit. She compared it another hundred she happened to have in her purse. The bills looked identical, down to the hologram and blue security strip.

After that, Wendy says, they "went outside and tore the Jeep apart." Alas, they could find no other riches hidden beneath the floor mats.

As far as karma goes, Wendy could probably have used more than $100 after getting her car stolen. But she's trying to look at the bright side of things.

"It covered the car seat that they took," she says, chuckling. "That's something."