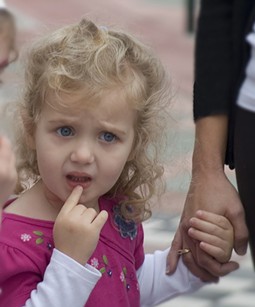 The lunch hour was pretty typical on Thursday at the Huck Finn Shopping Center...typical, that is, until police officers who happened to be in the vicinity saw a disconcerting site: A man, dressed in women's clothing, walking across the parking lot in such a manner as to expose his genitalia.

The gentleman (?) in question was arrested, and is now apparently being held for sexual misconduct (and for having some pot in his car). But what did the fine citizen-shoppers of Hannibal say about this incident?

One eye witness described the suspect...[as] dressed in fish net stockings and high heels. "Maybe in the city," she said shaking her head. "But not here."

Now wait a second, ye who slander St. Louis. Our city's cross-dressers who go commando and show commando would NEVER wear fishnet stockings before Labor Day. We are NOT heathens.