Authorities say that Lucas Henson burned 7 acres of Mark Twain National Forest, pointed a crossbow at a federal agent and ran into a river on his way to getting arrested 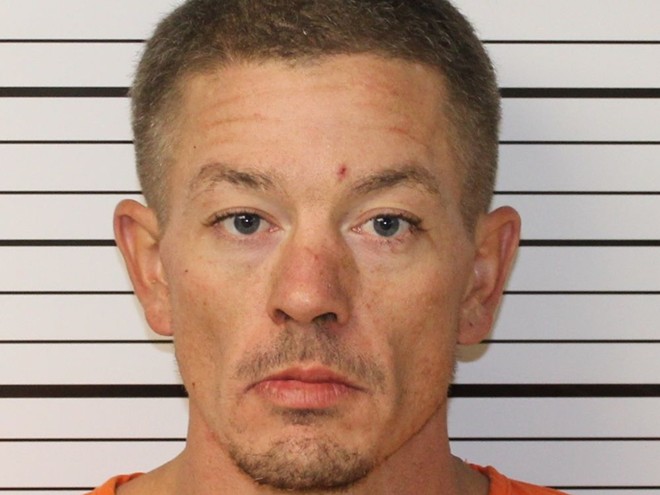 Catching Lucas Henson was no walk in the woods.

Law enforcement's pursuit of the 36-year-old Missouri man was only just beginning when Henson, chased by Butler County Sheriff's Deputies, crashed a stolen 2007 Dodge pickup into woods near Mark Twain National Forest. The ensuing hours-long chase saw Henson set multiple forest fires in an attempt to throw federal and local authorities off his scent. At one point, after setting the blazes, Henson pointed a cross bow at Forest Service agents who had cornered him. The move bought Henson just enough time to run into a river and get away, but it added an additional charge when he was indicted in federal court last week.

On Wednesday, federal prosecutors charged Henson with assaulting a law enforcement officer, committing arson and being a felon in possession of a firearm. The federal charges are in addition to a slew of state charges the Iron County man faces, all stemming from a wild weekend in October.

According to multiple Butler County Sheriff's Office probable cause statements, Henson's weekend-long crime spree began in the early hours of Saturday, October 22, when he stole a 2003 Ford Econo van from Patriot Rentals in Poplar Bluff. Henson then drove the van to County Road 468, also in in Poplar Bluff, where the van ran out of gas and Henson abandoned it.

Henson then allegedly stole a red 2007 Dodge pickup from JM, a Poplar Bluff man who reported the truck stolen.

Not long thereafter, Henson was captured on surveillance video pulling up to a Wayne County residence in the pickup, burglarizing the home and making off with a Ruger pistol.

Around 11:30 a.m. on Sunday, JM spotted his missing Dodge near the intersection of Highway 60 West and the heavily-wooded County Road 409.

JM approached his truck when Henson, wearing blue jeans, a ball cap and no shirt, stepped out of the stolen vehicle and pulled from his waistband the stolen pistol, pointing it at JM.

Henson then drove away in the Dodge, and JM took off in his own vehicle in pursuit, calling the police as he did.

Deputies located Henson in the truck, now on County Road 401, which runs along the Black River. Fleeing the deputies, Henson drove into a wooded area and quickly crashed the Dodge, leaving it "extremely damaged," according to a probable cause statement.

Henson then fled into the Mark Twain National Forest.

A K9 unit from Wayne County and agents with the U.S. Forest Service arrived to assist in the search for Henson. Law enforcement officers and dogs had covered several hundred yards on foot when they encountered a "large forest fire," and Henson's trail was lost.

A U.S. Forestry Agent later tracked Henson to an area near the Black River in Wayne County and announced himself as a federal agent. Henson turned around and pointed a loaded crossbow at him. The agent ducked and drew his weapon, but Henson "ran into Black River and escaped out of the other side," a probable cause statement says.

Several hours later, not far from County Road 401 where Henson had crashed the Dodge, the Missouri State Highway Patrol and agents with the U.S. Forest Service stopped a shirtless, jean-wearing man in possession of a lighter and a crossbow. That man turned out to be Henson, who was placed under arrest.

According to the probable cause statement, Henson admitted to authorities he stole the Dodge truck and pointed the crossbow at the Forestry Agent, though he said he wasn't going to shoot him.

The Ruger pistol was recovered from a fire pit, and deputies say Henson admitted to trying to burn the gun.

A subsequent investigation showed that Henson allegedly started three forest fires as a way to throw law enforcement off his trail. One of the fires was in Butler County, the other two set in Wayne County.

In addition to the federal charges, Henson is currently facing a slew of state charges including robbery, resisting arrest and armed criminal action.

Prior the incident in the woods, in both August and September, Henson was arrested for meth possession.

Henson is also facing a civil lawsuit and criminal charges in Wayne County stemming from this summer when Henson's then-landlord accused him of stealing the storm doors, plumbing pipes and electrical wiring from a house Henson had previously rented.