Cupples 7: City Says Historic St. Louis Site Will Be Demolished Unless a Developer Steps Up 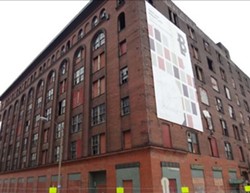 Unless a developer steps up, the historic Cupples 7 building in downtown St. Louis will soon be demolished.

And even if developers do emerge, they would need to have a solid plan to stabilize the site immediately -- or else it will have to come down. So says the city, which doesn't own the site, but has determined that the structure has become a serious safety hazard.

Still, the mayor's office and local preservationists are still hoping that someone -- with funding and a plan -- comes forward.

"We will welcome them until the wrecking ball swings," Maggie Crane, spokeswoman for Mayor Francis Slay, tells Daily RFT.

Will anyone be able to stop the demolition?

As quick background, Cupples 7 is a seven-story brick building and the only structure in the historic Cupples Station complex that has not been renovated. That complex was constructed by Eames and Young for Samuel Cupples between 1894 and 1917. The buildings are on the National Register of Historic Places, but Cupples 7 -- on 11th and Spruce streets -- was condemned by the city in 2008.

Now, city officials say, it poses a serious risk and needs to be stabilized immediately or be torn down.

That means that the city has two requests for proposals out now: one for a development plan to save Cupples 7 and another to demolish it. The latter, released yesterday, seems to be the more likely course of action. Demolition could happen in early June.

The city does not own the building, but, Crane tells us, "we are trying to be good stewards of public money, public trust and public safety."

In a statement sent out yesterday, Slay -- who recently wrote on his blog about his desire to see Cupples 7 stay alive -- says:

Public safety is driving this decision. Cupples 7 did not have a good winter, and City engineers believe it is now an imminent danger. They are afraid it will collapse and hurt someone....

It will only be too late once the proverbial wrecking ball swings. If a developer is out there, this is the last moment to come forward.

Officially, building commissioner Frank Oswald has declared an "emergency condition," for the site with the demolition notice released yesterday. The full document is below.

Ballpark Lofts III, headed by developer Kevin McGowan, owns the property, but all plans to redevelop it have been unsuccessful. And previous efforts to demolish the site have also failed, because of the site's historic status.

But now it's too much of a risk, the city says. And engineers estimate it will take anywhere from $4 to $8 million to "eliminate the hazard." Further, the current street closures surrounding Cupples 7 are a burden on surrounding properties and businesses, according to the city.

Andrew Weil, executive director of the Landmarks Association of St. Louis, tells Daily RFT that, unfortunately, it seems like a lost cause at this point.

"The city bodies that were tasked with protecting buildings like this did everything within their power," he says. (The mayor's office notes that city leaders have tried since last November to find a viable buyer who could fortify the historic building and eliminate the danger. They've had no luck.)

Continue for more commentary from Andrew Weil and copies of the relevant documents in this case.