Lionsgate. A Keep Your Head/Benaroya Pictures Production
Cymbeline proves that every Shakespearean work needn't be remade.

Late last year, it was announced that Michael Almereyda's latest Shakespearean film was going to be released under the distinctively non-Shakespearean title Anarchy (possibly as a lure to fans of the TV series Sons of Anarchy, which features Shakespearean themes placed in a biker-gang setting). The producers thought better of the name change, but you can sympathize with their dilemma: The new film is peopled with drug dealers, skateboarders and punks, and punctuated with gunfire and explosives. Wouldn't Shakespeare himself agree that Anarchy had more box-office appeal than The Tragedie of Cymbeline?

Anachronistic revisions of Shakespeare are common these days (probably too common), but what many directors fail to consider is that resetting a play into a new and perhaps intentionally "wrong" location runs the risk of losing its meaning. Some directors find a metaphor that gives new meanings to the play (Orson Welles' famous productions of Macbeth and Julius Caesar, set in Haiti and fascist Italy, respectively); while others do best by playing down the discrepancy between setting and text (Kenneth Branagh's admirable nineteenth-century Hamlet). In Almereyda's makeover of Cymbeline, rival armies become rival gangs; leaders expecting to be paid tributes become crooked cops expecting payoffs. Swords are replaced by guns, and exposition comes from TV news reports. Granted, this his been done before -- by Ralph Fiennes in Coriolanus, Baz Luhrman in Romeo + Juliet and countless other films -- but it still tends to be more of a distraction than a legitimate reinterpretation of the play. Almereyda's film is at its best when he can ignore the mean-streets setting and let the characters take precedence over the production design. 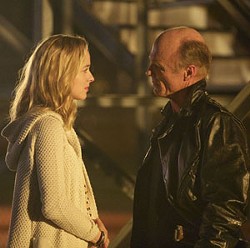 Cymbeline -- the original play -- takes place in ancient Britain, as the title character, a British king, prepares for war against the Romans, all the while distracted by family troubles. His daughter (and sole heir), Imogen, has married her true love, Posthumus, who is immediately banished by Cymbeline for his presumptuousness. Meanwhile the Queen, Imogen's stepmother, is secretly planning to set up one of her own sons as Imogen's husband, and then poison Cymbeline so that said son takes the throne. Toss in faked suicide, gender-switching disguises and that Shakespearean standard, the reappearance of characters long believed to be dead, and you've got the makings of a complex and engaging romance.

Almereyda, sharing the opinion of most Shakespeare scholars, realizes that the heart of the play is the story of Imogen and Posthumus. The lovers are separated by Cymbeline and tricked by the sinister Iachimo, who bets Posthumus that he can seduce the young bride. Much of this plot is isolated from the surrounding violence and action, so the characters and original text work without any unnecessary gimmickry.

Penn Badgley is adequate as a baby-faced Posthumus, but Dakota Johnson, as Imogen, is considerably better here than she was as the rag-doll sex toy of Fifty Shades of Grey. As Iachimo, Ethan Hawke, who played Hamlet for Almereyda's earlier Shakespearean outing, is good enough to make you wish he had a larger role. He's a scheming, self-serving jerk, yet he can pull off one the play's most famous scenes, where he sneaks into Imogen's room by having himself shipped in a crate, without turning it into a farce.

The Imogen and Posthumus plot aside, the rest of the film is uneven, and the action-movie setting is stretched too thin to be taken seriously. Almereyda is ruthless, even reckless, in editing the play, so most of the other characters are downsized to the barest outlines. But even reduced Shakespeare can be absorbing, and Almereyda's frequently unconventional casting is surprisingly effective. Ed Harris' Cymbeline is forceful, despite the role being reduced to barely more than a cameo. Even better is the underrated Milla Jovovich as the unnamed Queen, overflowing with villainous mischief.

For all of his extreme revisions, Almereyda has the good sense to know when to ignore his convoluted framework and stick with the story, albeit in a scaled-back form. As with all such Shakespearean hybrids, this is certainly not the Cymbeline that audiences at the Globe saw in 1609; purists might argue that it barely deserves to considered Shakespearean at all -- and they may be right. By its very conception, a production like this disregards Hamlet's famous advice for actors ("Suit the action to the word, the word to the action"), but somehow the words always manage to hold their own anyway.