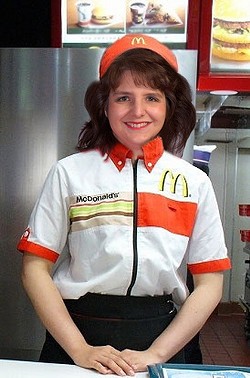 Photoshopped Image Via
Cynthia D at Mickey D's.
It seems like just yesterday that the Republican State Rep. from O'Fallon was named Ass Clown of the Year and "Worst Person in the World" for expressing her belief that government food aid should be eliminated because hunger can be a "positive motivator" for young poor people to find jobs.

Now, less than a year later, Davis is behind new legislation that would feed people who don't want to be fed.

Davis is sponsoring H.B. 1235, which would require terminally ill patients to be fed by feeding tubes for 60 days -- even if they've said they don't want them.  After the 60 days, health-care providers would have to feed the patient food and water by mouth three times a day.

Actual text from the proposed law:

Such oral feedings shall be offered to the extent and degree that the patient is able and willing to swallow or hold food in the patient's mouth, unless there is clear and evident choking, distress, and pain.

If a patient swallows at any time during oral feeding, such swallowing shall be deemed a desire to continue oral feeding or artificially supplied nutrition and hydration and shall be considered a revocation of any health care directive to the contrary

Davis obviously didn't think this one through. She should be trying to end programs that give handouts to the sick and dying so they'll get off their goldbricking behinds and find jobs.