Even as Damon Davis' Star Rises, His Work Most Resonates in St. Louis 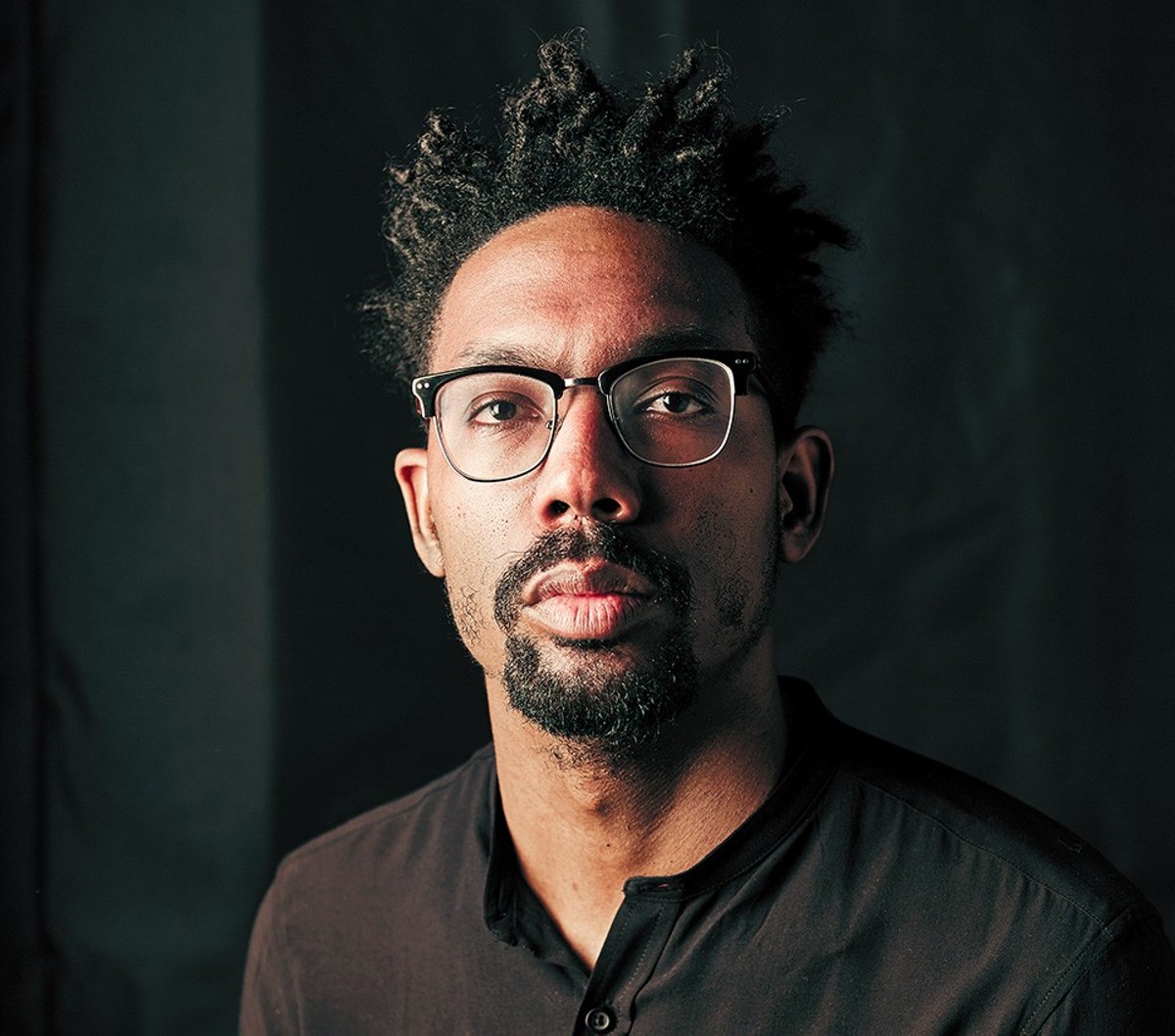 It's Monday afternoon in early June and Damon Davis is plotting. He's working in the white-walled space of the Luminary, the Cherokee Street gallery and event space where he'll premiere his multi-media art show, Darker Gods in the Garden of the Low-Hanging Heavens, in a few days. Most of the gods in question are encased in frames that have yet to be hung, and there's a question of how best to use the gallery's 4,000 square feet — no small task for a single artist in a space that usually hosts curated, multi-artist shows.

As Davis walks around the perimeter, gallery co-owner Brea McAnally tends to the telephone and a printer that seems to be working overtime. The Darker Gods material has been in process for a few years, Davis says, but since this is a multi-media show — he corralled digital images, sculpture, text and a dance performance, as well as an accompanying full-length album — he's not sure how best to tell the story.

"Now I'm just trying to figure out, thinking about how we can put the words into the space," says Davis. "Brea just had a great idea about putting a poem right there, because this wall is so big. So now I'm just thinking about what's the best way to represent what's going on here — the words, the photos."

By the Friday night opening reception, the art is hung, DJ Stan Chisholm is pulling deep soul from his record crates, and the gallery is full of well-wishers, friends and curious patrons. In keeping with the show's religious overtones, Davis himself is dressed like a cleric, in black pants and a collarless white button-down. He's gracious among fans and family, often posing for photos in front of a space that, four days ago, was a blank canvas. He and McAnally chose a quatrain from Davis' self-made mythology to fill the previously empty wall:

While the verse relates to one of the gods in his pantheon, many young women at the opening are taking portraits and selfies in front of the wall. Something about the lines resonates; perhaps it is the transfiguration of something dark and earthen into a powerful, luminous being.

That idea is at the core of the Darker Gods experience and was the impetus for Davis' most comprehensive undertaking to date. The story, as presented at the Luminary, was told primarily through photographs, all of which were digitally altered in some way. A brief video of a dance troupe enacts what Davis calls a "creation story" on a continual loop in the gallery's alcove, while a room of physical media represents altars and artifacts.

The aim was to create an immersive experience, says James McAnally, who runs the Luminary with wife Brea. He noted that the scope of Davis' vision required the entirety of the gallery space — something the Luminary has only accommodated once before.

"It was clear, as soon as we started talking with Damon about this project and how expansive it was, even at that stage, which was probably a year, year-and-a-half before the show happened, we just realized very quickly that he not only wanted to work on that scale but also needed to set the tone of his own environment," says McAnally. "So it was important to give him the entire space and full resources and attention that goes with that." 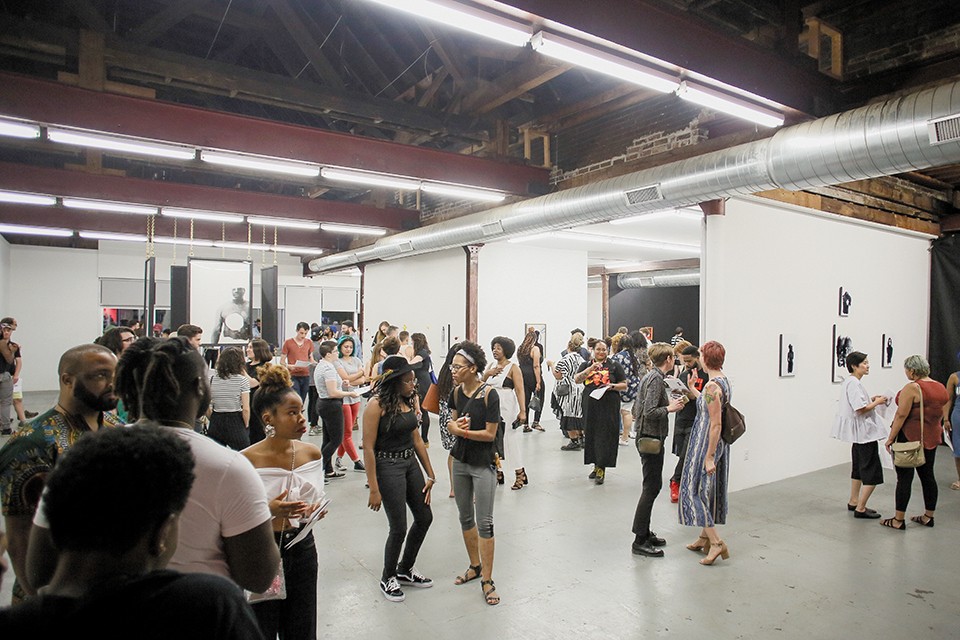 BREA MCANALLY
The Darker Gods opening reception drew a line that stretched along the block.

Davis, 33, grew up in East St. Louis but came to the Missouri side of the river to attend Saint Louis University, which he graduated in 2007 with a degree in communication tech. He has now lived and worked in south St. Louis for the better part of a decade. His hair is a halo of tight braids, and his eyes seem permanently half-lidded through his glasses, giving an air of both benign benevolence and extra-strength bullshit detection.

Local fans who know Davis primarily as a musician won't be surprised at his sense of scale. As co-founder of the music collective FarFetched, Davis has grouped together a number of local acts that don't fit neatly inside genres — acts like electro-shoegaze trio CaveofswordS, soul preacher Rev. Sekou and Davis' own glitchy, cavernous hip-hop fantasias. Every year the label rolls out a compilation called Prologue. Along with its annual showcase and regular events, private parties and gallery takeovers, the album projects have elevated and integrated elements of the St. Louis music scene that were formerly balkanized.

And though Davis still records new music and has his hands in FarFetched's continuing mission, his work has increasingly pushed into visual mediums. His art began to reflect the struggle of fellow African Americans in St. Louis and the language of protest and activism that arose after Michael Brown's death in Ferguson in 2014. His project All Hands On Deck used the rallying cry of the Ferguson protests — "hands up, don't shoot" — as inspiration, pasting black-and-white pictures of outstretched hands over the plywood used to barricade area doors and windows broken during the ensuing chaos. One piece from that series is currently housed in the Smithsonian's National Museum of African American History and Culture in Washington.

But it was Whose Streets? that solidified Davis' reputation far beyond St. Louis. Filmmaker Sabaah Folayan enlisted him as the co-director of her documentary, which focuses on the fallout from Brown's shooting at the hands of a Ferguson officer and the way the activist community was galvanized by it. The film was both widely distributed and widely praised, making many best-of lists in 2017; PBS aired it nationwide on July 30. The experience took Davis and Folayan all over the country for screenings and discussions, which left Davis in a curious space: an artist, activist and storyteller tasked with retelling one of the darkest chapters in St. Louis history.

At this point, Davis calls himself a "post-disciplinary artist." "I don't really have a primary medium — whatever works best for the story I'm trying to get across," says Davis. "Some stuff, you can get an idea across in three minutes. But some ideas you need two hours, you need a movie, and some ideas you can do in one photograph. It's more about me figuring out what I want to say and then thinking about how I want to present it to people."

The scope of Darker Gods dwarfs all of his other projects. Coming off the success of Whose Streets?, Davis had a lot of eyes on him, and rather than stick to a single mode, his show explodes in many directions. And while the show was only open at the Luminary for a month, Davis has plans to extend the world he's created. He calls the show "just the beginning" of the story.